US keeper Steffen positive for COVID-19, replaced by Johnson

The 26-year-old missed the Americans’ opening 0-0 draw at El Salvador on Thursday due to back spasms and U.S. coach Gregg Berhalter had said that Steffen also was not dressing for Sunday’s home opener against Canada.

Steffen is being replaced on the roster for Wednesday night’s game in San Pedro Sula by New York City’s Sean Johnson, who was in Nashville for a Major League Soccer match Friday, returned to New York and then traveled to Tennessee.

The U.S. Soccer Federation said Steffen, who did not travel to El Salvador, was isolated after an initial positive test, which was confirmed by additional testing completed Sunday. The USSF said one other member of the delegation, who was not identified, had tested positive and underwent the same protocol. That person also did not travel to El Salvador.

The USSF said all other potential contacts in the delegation had tested negative.

Steffen is the backup to Ederson at Mancheser City.

Johnson, 31, has made nine international appearances. 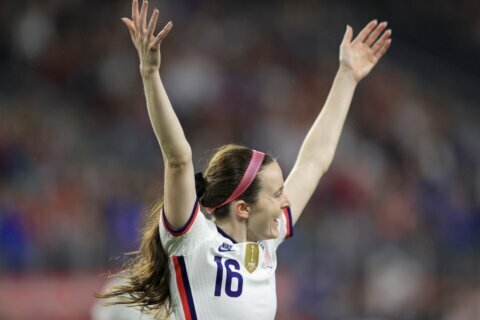