The Latest: Tiafoe beats No. 5-seed Rublev in late Open 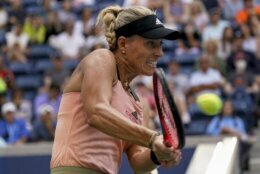 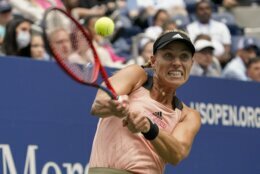 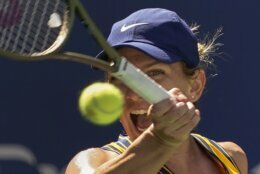 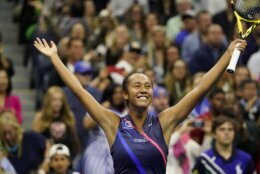 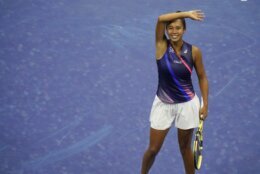 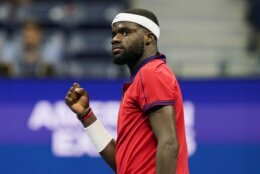 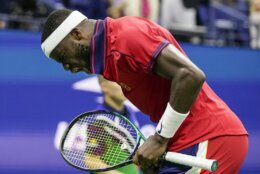 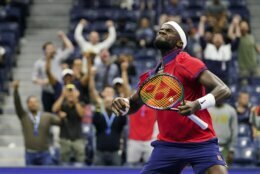 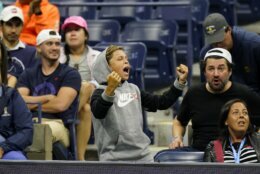 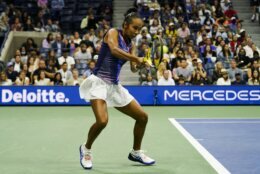 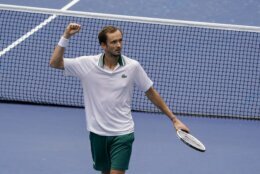 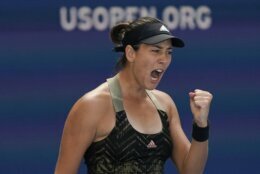 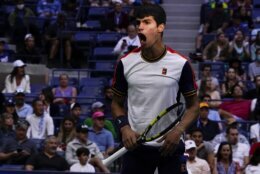 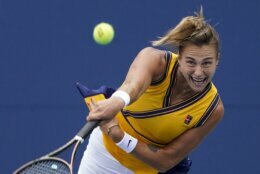 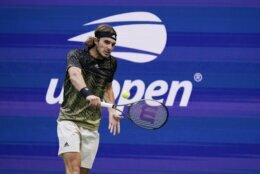 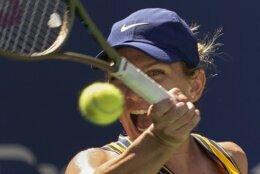 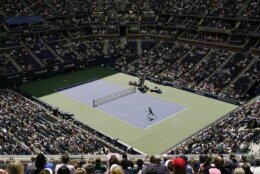 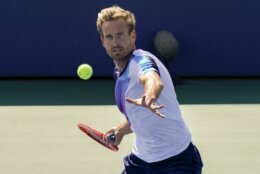 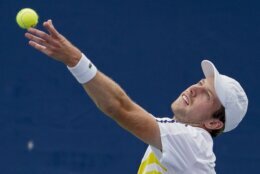 American tennis player Frances Tiafoe had a small, late-night crowd at Arthur Ashe Stadium going wild on every point in an upset win that pushed the record for the latest finish in tournament history.

Tiafoe had experienced five-set heartbreak before at Flushing Meadows. He lost to John Isner in 2016, Roger Federer in 2017 and Alexander Zverev in 2019 in five. Not this time. The 23-year-old fan favorite stripped off his shirt and celebrated with fans, before he sat on the bench and shook his head at his accomplishment.

Tiafoe won the five-setter in 3 hours, 45 minutes. Tiafoe is the first American man to reach the second week at the U.S. Open in consecutive years since Andy Roddick and Mardy Fish in 2011-12.

Aryna Sabalenka is on her way to face her Grand Slam doubles championship partner after she knocked off Danielle Collins 6-3, 6-3 at Louis Armstrong Stadium.

She’s into the second week of the U.S. Open for the first time since 2018.

Sabalenka reached the semifinals at Wimbledon this year. She’s ranked No. 2 in the world and five of her 10 career WTA titles have come in the last 18 months.

Fernandez is an 18 year old from Canada who is ranked 73rd and never had been this far in Grand Slam competition.

Fernandez says, “from a very young age, I knew I was able to beat anyone, anyone who is in front of me.”

Osaka said after the loss she was thinking about taking another break from tennis “for a while.”

Fernandez says Osaka, is a “great example for anybody that’s on tour and all the little girls in the world.”

By the end of the match, the crowd was booing Osaka for turning her back to the court and taking too much time between points. The fans went wild for Fernandez and only got louder with each point won deeper into the match. Fernandez smiled and flashed two thumbs up in celebration.

She says he was glad she “put on a show for everyone that came to watch.”

Hours after the win, Fernandez bounded into came into the media center, laughing and relaxed with her hands in her pockets.

But she could use some rest.

Fernandez joked, “I’m way past my bedtime at the moment.”

Defending champion Naomi Osaka repeatedly smashed her racket to the court, smacked a ball into the crowd, hid under a towel and imploded over the final two sets in a third-round loss at the U.S Open.

Eighteen-year-old Canadian Leylah Fernandez had the fans on her side as she pressured the third-seeded Osaka and pulled off the 5-7, 7-6 (2), 6-4 victory at Arthur Ashe Stadium.

Osaka threw her racket at least three times and was finally hit with a code violation in the third set when she hit the ball into the stands. She even draped a towel over her head as she took a break following her second-set loss.

Osaka played her first Grand Slam since she pulled out of the French Open in late May for a mental health break.

Fernandez used her left-handed serve to defeated two-time US Open quarterfinalist Kaia Kanepi in straight sets before knocking off Osaka. She waved her arms and pumped her fist toward fans that cheered louder for her on every late point.

Osaka glumly walked to the locker room while Fernandez smiled and flashed two thumbs up in celebration.

Defending champion Naomi Osaka has lost a set at the U.S. Open for the first time this year.

Osaka slammed her racket to the court multiple times in frustration during her second-set loss to 18-year-old Canadian Leylah Fernandez. Osaka took the first set 7-5. Fernandez won the next 7-6 (2).

Osaka draped a towel over her head as she took a break after the second set loss.

They’ll head to a third set to decide who advances to the fourth round.

Osaka is in her first Grand Slam since she pulled out of the French Open in late May for a mental health break.

There are two male qualifiers in the U.S. Open’s fourth round for the first time in 21 years — and they could be joined by a third.

Peter Gojowczyk, a German ranked 141st, and Botic van de Zandschulp, a Dutchman ranked 117th, both picked up their third main-draw victory this week at Flushing Meadows on Friday to go along with a trio of wins in qualifying rounds last week.

Gojowczyk beat Henri Laaksonen, yet another qualifier, 3-6, 6-3, 6-1, 6-4. Gojowczyk’s next opponent is 18-year-old Carlos Alcaraz, who eliminated No. 3 seed Stefanos Tsitsipas on Friday.

For van de Zandschulp, his 3-6, 6-0, 6-2, 6-2 win against Facundo Bagnis set up a matchup against No. 11 seed Diego Schwartzman for a berth in the quarterfinals.

Oscar Otte can make it three qualifiers into Week 2 by beating Andreas Seppi on Saturday.

The last time there were two qualifiers into the fourth round in New York was 2000, when Wayne Arthurs and Lee Hyung-taik did it.

Stefanos Tsitsipas can take all the time he wants in the bathroom now that he’s out of the U.S. Open.

Tsitsipas was booed by fans and criticized throughout the U.S. Open for his lengthy breaks in the bathroom. Tsitsipas pointed out that he’s doing nothing that violates any regulation.

Tsitsipas said after the loss, “I took my toilet break as a normal athlete. He said he only changed clothes during his break and lashed out at accusations he was doing more than that, like reading texts or receiving coaching advice in the bathroom.

Tsitsipas said he feels refreshed after he heads off the court to change his clothing.

He said, “ all of these things have been against me for no reason.”

Alcaraz, the teenager from Spain, used powerful groundstrokes in an entertaining match to knock off Tsitsipas. Tsitsipas can take all the long bathroom breaks he wants from home. The controversial Greek tennis player faced an unfriendly crowd again in large part because of his lengthy breaks in the bathroom.

Alcaraz easily pulled off the biggest win of his career and is in the fourth round at Flushing Meadows for the first time in his career. He was down 5-2 in the third set but kept pushing in a match that stretched past four hours.

Alcaraz thanked the crowd, absent last year because of the pandemic, for “pushing me up in the fifth set.” He became the breakout start of the U.S. Open and had fans chanting “Carlos! Carlos!” with each big winner.

Angelique Kerber won a matchup of previous U.S Open champions when she beat Sloane Stephens 5-7, 6-2, 6-3 at the U.S. Open.

The reward for the 16th-seeded Kerber? A potential date with No. 3 seed and defending champion Naomi Osaka.

Kerber, the 2016 champion, was ruthless in the third set to knock out 2017 champion Stephens.

Kerber beat Stephens for only the second time in seven career matchups. The 33-year-old Kerber won for the second straight day and laughed when she said she could use the day off on Saturday.

The 2019 runner-up at Flushing Meadows has lost only 22 games in his three matches thus far.

French Open champion Barbora Krejcikova is into the fourth round of her U.S. Open debut.

Krejcikova improved to 41-11 this season. Only top-ranked Ash Barty (42-7) has more wins in main draw matches on the women’s tour.

Garbiñe Muguruza has matched her best run at the U.S. Open by reaching the fourth round.

Muguruza has won Wimbledon and the French Open, but the No. 9 seed from Spain had reached the fourth round at Flushing Meadows just once, in 2017.

Azarenka was runner-up in New York last year for the third time. The No. 18 seed from Belarus was eliminated when she double-faulted on match point.

Simona Halep fought through a marathon first-set tiebreaker and eventually beat Elena Rybakina 7-6 (11), 4-6, 6-3 to reach the U.S. Open fourth round for the first time in five years.

The No. 12-seeded Halep needed seven set points to finally win the tiebreaker — after she was broken at love when serving for the set at 6-5.

She eventually won it when Rybakina double-faulted, then worked her way to the round of 16 for the first time since reaching the quarterfinals in 2016.

Rybakina, the No. 19 seed, was a quarterfinalist at the French Open, where she beat Serena Williams.

Naomi Osaka is expected to be back on the court for the first time since the first night of the U.S. Open when she faces Leylah Fernandez in a third-round evening match.

The defending champion received a walkover into the third round when opponent Olga Danilovic withdrew Wednesday with a viral illness unrelated to COVID-19.

Sloane Stephens and Angelique Kerber were to meet in another marquee women’s match, while Daniil Medvedev, Stefanos Tsitsipas and Andrey Rublev were all on the men’s schedule.

Brian White pulls Whitecaps even in 1-1 draw with Rapids