Coronavirus News: Fairfax Co. votes to increase substitute teacher pay | Is it time to get a COVID-19 booster? Which one? | Local cases of COVID-19 | How many in DC region are vaccinated?
Home » Sports » Offseason deals and signings…

NEWARK, N.J. (AP) — New Jersey Devils coach Lindy Ruff doesn’t like it when a question starts with the phrase: “You’ve been around hockey a long time…”

At the same time, the 61-year-old Ruff knows age can help coaches understand where people are coming from.

Take, for example, the Devils’ management and front office. In the offseason, they signed defenseman Dougie Hamilton to a seven-year, $63 million contract. They signed two more free agents in forward Tomas Tatar and goaltender Jonathan Bernier, and traded for stay-at-home defenseman Ryan Graves, adding them to one of the NHL’s youngest and fastest teams.

The message was loud and clear for Ruff. After missing the playoffs the past three seasons and making it to the postseason once since reaching the Stanley Cup Final in 2012, it’s time for the Devils to make something happen in 2021-22.

That’s the only goal Ruff has entering his second season as coach. He’s got more talent. He has former No. 1 overall picks Nico Hischier (2017) and Jack Hughes (2019) ready to show more, and he has a young, hungry team built on competing and not quitting.

“If you look at the commitment that our ownership has made to this team with the players that they brought in, they sent a message that it’s really important when we’re going down the stretch,” Ruff said. “We need to be in a position where we’re competing hard for that playoff spot.”

General Manager Tom Fitzgerald said the Devils were learning how to win last year when they posted a 19-30-7 record during a 56-game season shortened by the pandemic. While still in that phase, he wants to see more progress

“A lot of talent. A lot of skill, speed, everything you’d want,” he said. “It’s going to be on us to build some chemistry and get used to playing with each other, buy into the system and hopefully be ready to go for Game 1.”

Bernier said the offseason moves helped convince him to play in New Jersey.

Here’s what to look for this season. The Devils open at home against Chicago on Oct. 15.

The two first overall picks haven’t lived up to expectations.

Hischier starts this season healthy. He missed the first month last year because of an off-season leg injury. He got on the ice in mid-February and played five games before being hit in the face by a P.K. Subban shot that fractured his sinus. He had six goals and five assists in 21 games. His best season was as a rookie, when he had 20 goals and 32 assists in 80 games.

Hughes had 11 goals and 21 assists in 56 games last season. It was an improvement from seven goals and 14 assists as a rookie.

Mackenzie Blackwood is probably going to have to share the Devils’ goaltending job with the 33-year-old Bernier.

That was the plan last year when the team signed veteran Corey Crawford. However, he decided to retire shortly after training camp opened.

Blackwood struggled last season. He posted a 14-17-4 record with a 3.04 goals-against average. He also missed time with COVID-19 and it hurt his stamina.

There are three holdovers with Subban, Damon Severson and Ty Smith, who had an outstanding rookie season.

Hamilton, who will help the power play, Graves, and Jonan Siegenthaler are starting their first full season in New Jersey. They all have long reaches to fend off opposing rushers.

There are a couple of youngsters and veterans competing for roster spots. Former Ranger Jimmy Vesey is on a tryout deal. There are three recent first-round draft picks in camp in right wings Dawson Mercer, Chase Stillman and Alexander Holtz. Players who got a small taste of the NHL also are in camp — defenseman Kevin Bahl and forwards Nolan Foote, Tyce Thompson and Marian Studenic.

The Devils took defenseman Luke Hughes, Jack’s brother, with the No. 4 overall pick. He is playing at Michigan.

Jesper Bratt and Yegor Sharangovich could be on the verge of big seasons.

Sharangovich was outstanding as a rookie. The 23-year- Belarus native had 16 goals and 14 assists in 54 games. He also worked on the penalty kill.

Bratt missed the start of last season because of contract issues. He had seven goals and 23 assists in 46 games. He had 16 goals and 16 assists in 60 games the previous season. 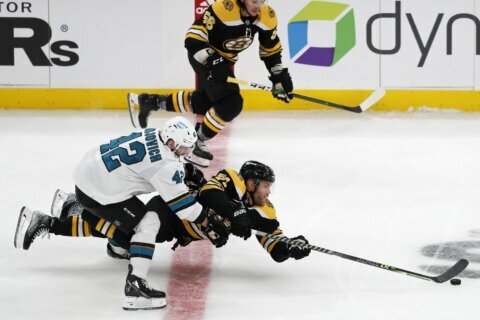