Major League Soccer and Liga MX will pause play for a month each summer beginning in 2023 for an expanded Leagues Cup tournament.

The tournament will include all the teams from the two leagues and decide three berths for the CONCACAF Champions League, including a spot in the round of 16.

The new Leagues Cup, sanctioned by CONCACAF, will be part of a bigger expansion of the Champions League, which the confederation for North America, Central America and the Caribbean region announced Tuesday.

The Leagues Cup is currently an eight-team competition between MLS and Liga MX clubs that started in 2019. The 2020 competition was called off because of the coronavirus pandemic.

The leagues are hoping the new competition calendar will spur excitement heading into the 2026 World Cup in the U.S., Canada and Mexico.

The Leagues Cup also will showcase the growing rivalry and collaboration between MLS and Liga MX. Stars from both leagues faced off in this summer’s MLS All-Star game and the Campeones Cup, a match featuring the leagues’ reigning champions, will be played Sept. 29 between the Columbus Crew and Cruz Azul.

“It’s an exciting time for all of us involved with the sport. With the Leagues Cup part of a new ecosystem that has a bigger, more important Champions League, all of us will benefit, especially the passionate soccer fans throughout the region,” MLS Commissioner Don Garber said. “And we are all working together in advance of the World Cup coming in 2026. The leaders of our sport in our region are all aligned in creating ‘rocket fuel’ to grow the popularity of our sport. Collaboration is the best way to go about achieving our goals.”

This year’s League’s Cup final will be played Wednesday between the Seattle Sounders and Club Leon in Las Vegas.

Under the expanded format, 29 teams from MLS and 18 from Liga MX will play in a group stage before advancing to a knockout round. The winner will receive prize money and an automatic berth in the Champions League round of 16, with the runner-up and third-place finishers earning a spot in the opening round. 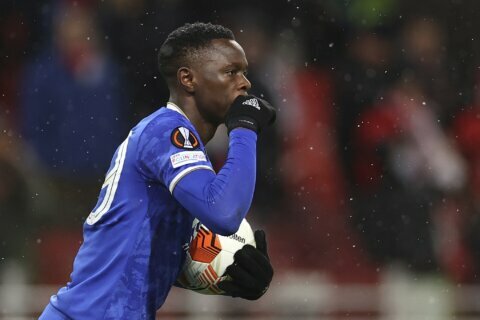