A look at some of the games being played in European soccer on Thursday: EUROPA LEAGUE: WEST HAM VS. RAPID…
Listen now to WTOP News WTOP.com | Alexa | Google Home | WTOP App | 103.5 FM

A look at some of the games being played in European soccer on Thursday:

Declan Rice helped West Ham get off to a winning start in the competition at Dinamo Zagreb two weeks ago and goes into the team’s second group game insisting he can achieve his ambitions at the London club despite being regularly linked with a move away. Chelsea and Manchester United are among the teams reportedly interested in the England midfielder. “I’m playing with a smile on my face, I’m going out there, I’m leading the team,” Rice said. “I think you could see a difference if I wasn’t going out there and giving 100% but every time I’m putting on the shirt — I’ve got the armband on at the moment — my only objective is to go out there and give everything for the club.” West Ham manager David Moyes has no concerns about Rice, who scored against Dinamo, having his head turned. “I don’t like saying it in front of him but he’s arguably one of the best young midfield players in Europe, if not the best,” Moyes said. “If you’re in that position every time he plays, he’s got a responsibility for himself.”

Legia Warsaw seeks a second win to open its tough group — that also includes Napoli and Spartak Moscow — on the back of some disappointing results in the Polish league. The team sits in 15th place in the 18-team Ekstraklasa after winning three and losing four in its opening seven games. Legia coach Czeslaw Michniewicz is dismissing any suggestion his players are inferior to those at Leicester, which has been close to qualifying for the Champions League in the last seasons. “It is not that we are short of Leicester,” Michniewicz said. “We have very good players, and we will play with outstanding players. I am convinced that there will be no pressure on my players. They are looking forward to this match. They will show their full potential.”

There will be a high police presence in and around Stade Velodrome for a match between teams with volatile ultras. The Marseille police prefecture announced reinforced security for the game, with visiting fans to be put into an increased section of the stadium and an empty buffer zone so there is no direct contact possible with Marseille fans. More police officers will be deployed on public transport and in the city center, notably around the city’s port area where big clashes have happened before. Marseille have been involved in crowd incidents this season and Turkish ultras often travel in large numbers. There were fights before the Paris Saint-Germain-Galatasaray game two seasons ago and when Lyon hosted Besiktas four years ago. On the field, Marseille coach Jorge Sampaoli hopes to welcome back imposing striker Arkadiusz Milik after four months out nursing a knee injury. The Poland forward netted 10 goals in 16 games last season.

Real Sociedad hosts Monaco enjoying an unbeaten streak since opening the season with a loss at Barcelona in the Spanish league. The Basque Country club has won five of its seven matches since then, including the last two. It sits in second place in the Spanish league, one point behind leader Real Madrid after seven rounds. Sociedad will be without forward Alexander Isak because of an injury. Monaco goes to Spain coming off three victories in its last four matches in all competitions. It has won two in a row in the French league.

Tottenham manager Nuno Espirito Santo is unfazed by recent criticism and only concentrating on getting his team to bounce back from its current slump. Things have changed quickly for the Portuguese coach He won his first three Premier League games in charge, but three straight losses have put him under pressure. The manner of the performances in 3-0 losses to Crystal Palace and Chelsea were concerning, but the way Spurs sank to a dismal 3-1 defeat at Arsenal on Sunday has had the alarm bells ringing. Tottenham opened the Europa Conference League with a 2-2 draw at Rennes and next face FC Mura from Slovenia. “I’m not worried about the judgements,” Nuno said. “What I’m worried about is how we can play better. How can we play better? The judgement, and the criticism, and the opinion and all of that is all part of it. And we have to deal with that. That doesn’t interfere with the way we work, it can only distract us. I’m very simple, telling you my focus is how can we improve, how can we improve.”

Union Berlin hosts Maccabi Haifa for what will be the first time an Israeli club plays at Berlin’s Olympiastadion. The stadium was built for the 1936 Olympics hosted by Nazi Germany. “We know that this game is of very special importance beyond the sporting side for our guests from Haifa and for the Jewish community in Berlin,” Union president Dirk Zingler said. The stadium is usually used by Union’s city rival Hertha Berlin, but it has been taken over by Union for European competition this season as its own stadium in the eastern borough of Köpenick doesn’t have enough seating capacity to meet UEFA demands. Union’s Bundesliga rivals Eintracht Frankfurt and Bayer Leverkusen are playing in the Europa League, at Belgian team Royal Antwerp FC and Scottish team Celtic, respectively.

Jose Mourinho and Roma are still fuming over perceived refereeing errors in a weekend derby loss to Lazio as the Giallorossi visit Ukrainian team Zorya Luhansk. Roma has won seven of nine matches across all competitions under Mourinho and the coach has big goals for the Conference League. “We are in this competition, so we want to win it,” Mourinho said. “But we are a long, long way from being able to realistically think about that. We have to take things step by step, and the first step is to get through the group.” Mourinho recalled struggles in Ukraine over the course of his career. “With Inter I won in the last minute, with Chelsea I drew and with Manchester (United) I won 1-0,” he said. “It’s never been easy.” Including the playoff phase, Roma has won three of three matches in the Conference League with 10 goals scored and two conceded. In the Group C opener, Roma routed CSKA Sofia 5-1. 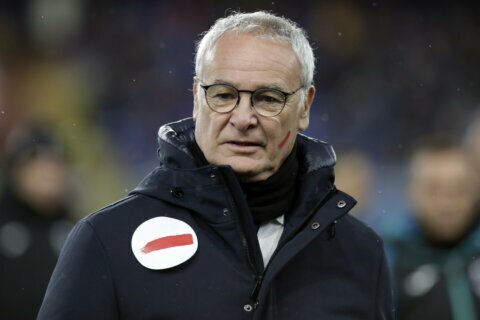 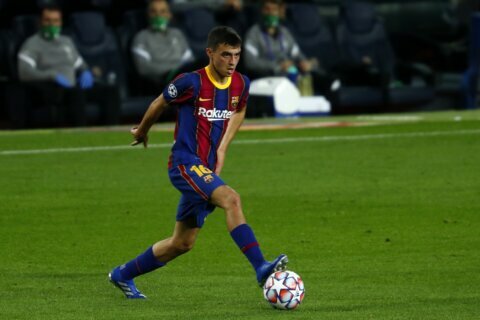