Los Angeles (7-9-6) ended a club-record, eight-game winless streak. LAFC had never gone more than five straight games without a win before this season. Kansas City (11-5-7) has lost twice in its last 13 matches — with six victories.

Fall opened the scoring in the 19th minute by heading in Eduard Atuesta’s corner kick. He made it 2-0 in the 61st in similar fashion, heading home Atuesta’s free kick.

Cristian Arango made it 3-0 in the 71st after he was left wide open at the penalty spot for Daniel Musovski’s pass. Eduard Atuesta capped it with a penalty kick in the 87th.

Sporting KC was reduced to 10 men in the 58th when Roger Espinoza received a straight red card for a studs-up tackle of Cristian Arango. 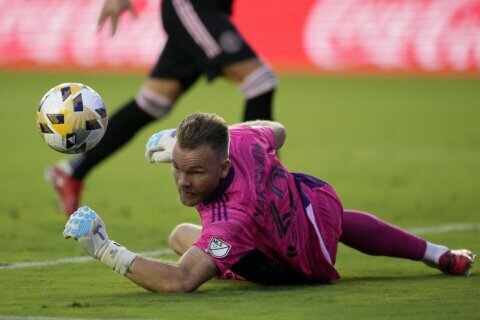