Coronavirus News: Fairfax Co. votes to increase substitute teacher pay | Is it time to get a COVID-19 booster? Which one? | Local cases of COVID-19 | How many in DC region are vaccinated?
Home » Sports » Lavelle, Morgan shine as…

CINCINNATI (AP) — Rose Lavelle thrilled her hometown fans with a goal and three assists in the first 15 minutes, Alex Morgan scored three goals and the United States women routed Paraguay 8-0 in an exhibition on Tuesday night.

The U.S. topped Paraguay by a combined score of 17-0 in the two-game series in Ohio, following Thursday’s 9-0 win in Cleveland.

Lavelle, a Cincinnati native, brought the crowd of 22,515 at TQL Stadium to its feet when she headed in a cross from Casey Krueger in the fourth minute.

“It was so special just to step out there in front of all my family and friends, in the city that I feel like has built me into who I am today,” Lavelle said. “I think it’s the best soccer city in the world. It’s the best stadium in MLS. The night did not disappoint. It was incredible.”

Lavelle followed with a pair of assists, first to Sophia Smith in the sixth minute. It was Smith’s first career goal in her first start.

“It’s something I’ve dreamed of since I was a little girl,” Smith said. “I’ve just kept my head down and kept working hard. Everything’s coming together.”

Catarina Macario scored in the 15th minute, assisted by Lavelle, to make it 5-0.

Carli Lloyd, who has two games left before she retires, entered in the 61st minute and scored her 134th career goal.

Lloyd was coming off a five-goal performance on Thursday that moved her into third on the career list.

Macario added her second goal of the match off a volley in the 82nd minute.

Lavelle was playing in Cincinnati for the second time as a member of the national team, but it was her first appearance in TQL Stadium, the new home of Major League Soccer’s FC Cincinnati.

Following the game, Lavelle said her goal on Tuesday ranked up there with her goal in the 2019 World Cup final against the Netherlands. Her teammates sensed all week how special the evening would be for Lavelle.

“Rose is from Cincinnati, and nobody will forget that after this camp,” Smith said. “I think it’s really cool for Rose to play in front of her family. Everybody dreams of that opportunity. To play as well as she did, I’m really excited for her.”

Lavelle left the field to a loud ovation in the 70th minute when she was subbed off for Kristie Mewis.

“The atmosphere out there was unreal, it was energetic, enthusiastic,” U.S. coach Vlatko Andonovski said. “There were times I was getting goosebumps. In particular with Rose Lavelle, she’s special. She’s a very important part of our team.”

Morgan’s third goal was her finest of the night, a right-footed back-heel off a cross from Smith to make it 6-0 in the 53rd minute.

Andonovski was without Christen Press, who is taking time off to focus on her mental health. Alyssa Naeher, Julie Ertz, Sam Mewis and Megan Rapinoe missed the game with injuries.

The absences presented few problems against Paraguay, which also lost 7-0 to Japan in April in its only other scheduled match after three games against Colombia were canceled because of COVID-19.

“It’s not easy to come into an environment like this to play, the best team in the world,” Andonovski said. “We came out with a lot of energy and intensity. It’s not easy, but kudos to them for fighting all the way through.”

The United States is in the midst of a four-game stretch following a disappointing bronze medal at the Tokyo Olympics.

The team is scheduled to host South Korea twice next month before a possible trip to Australia in November. 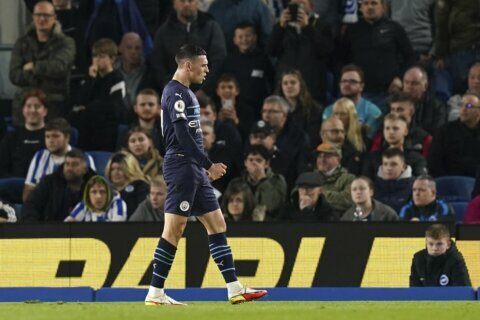