Koeman gets 2-match ban for complaining after draw at Cádiz

Koeman received a two-match ban on Friday for complaining at the end of Barcelona’s 0-0 draw at Cádiz in the Spanish league the day before. The result extended Barcelona’s winless streak to three matches and increased the pressure on Koeman.

Koeman was sent off deep into stoppage time for complaints directed at the fourth official. The Spanish soccer federation determined that this merited a tougher two-game suspension than the automatic one-game ban for a red card.

Koeman will miss Barcelona’s home match against Levante in the Spanish league on Sunday, as well as the team’s visit to defending champion Atlético Madrid next weekend.

One of the reasons that upset the Dutch coach was the sending off of midfielder Frenkie de Jong after a second yellow card earlier in the match. Barcelona argued that De Jong touched the ball before contacting his opponent and shouldn’t have been booked.

Koeman said “in this country they send you off for nothing.”

Koeman has been publicly at odds with Barcelona president Joan Laporta, and on Thursday players showed that they are not on the same page as the coach either after he said Barcelona has no significant chance of winning titles this season.

Koeman made his comments by reading from a prepared statement in the pre-match news conference on Wednesday, something that caught the players and Laporta by surprise. Team captains Gerard Piqué and Sergi Roberto both dismissed Koeman’s comments after the match, saying Barcelona will be contending for titles.

Koeman was hired by former president Josep Bartomeu shortly after the team’s embarrassing 8-2 loss to Bayern Munich in the quarterfinals of the Champions League last year.

The Catalan club is playing without Lionel Messi for the first time in nearly two decades after he joined Paris Saint-Germain because of Barcelona’s financial struggles. It also lost forward Antoine Griezmann to Atlético Madrid.

Barcelona is in seventh place in the league with nine points, seven behind leader Real Madrid with a game in hand. It visits Benfica next Wednesday in the Champions League after opening its European campaign with a 3-0 home loss against Bayern Munich. 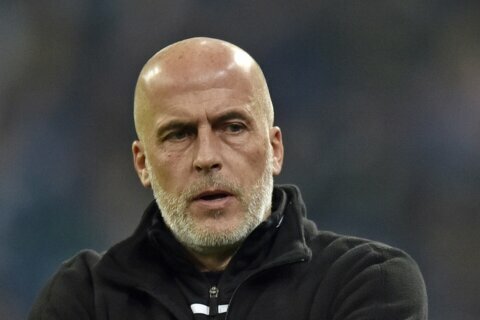