BERLIN (AP) — While Hertha Berlin’s millionaire backer Lars Windhorst was meeting Prince Albert II of Monaco aboard a luxury yacht, his team was getting trounced 6-0 by Leipzig in the Bundesliga.

It was the second successive heavy defeat Hertha suffered against one of the teams Windhorst wants to challenge as part of his vision of turning the club into one of Germany’s best.

Bayern Munich routed Hertha 5-0 on August 28 in what was the club’s third consecutive defeat to start the Bundesliga before it restored some semblance of pride by beating the two promoted teams.

Then came the debacle in Leipzig on Saturday.

“Wow, I’m a bit shocked and need a drink right now,” Windhorst wrote on Facebook after the game.

It was the latest in a series of signs that Windhorst is unhappy with Hertha’s lack of progress since he first began backing the club in June 2019.

Windhorst invested a total of 374 million euros ($450 million) for a 66.6% share in the company behind Hertha, though the club retains majority voting rights in line with the league’s 50+1 rule limiting the influence of outside investors.

Windhorst, who has largely adopted a backseat role and allowed others to run the operation, said at the time that he saw Hertha as a “Big City Club” capable of challenging on an international level like others in Paris, Madrid or London.

But Hertha has been challenging at the other end of the table, fighting relegation in the seasons since. It worked its way through four coaches in Windhorst’s first campaign, including a tumultuous spell under Jürgen Klinsmann, before Pál Dárdai returned last term to stabilize things after a bad run of results under Bruno Labbadia.

This season was supposed to be the one when Hertha finally delivered on Windhorst’s promise. The club lured Fredi Bobic as sporting director after his success at Eintracht Frankfurt, and former Sky Germany CEO Carsten Schmidt was hired as managing director.

But Hertha is 12th after four defeats from its opening six Bundesliga games, and all signs point to another season of disappointment.

Dárdai has not been helped by injuries – defenders Dedryck Boyata, Jordan Torunarigha and Lukas Klünter were all out against Leipzig – or a tough opening series of games, but his response after the rout in Munich was sharply criticized by the powerbrokers at the club.

“I’m not hanging onto my seat, I’m just helping out,” Dárdai said at the time, when he indirectly offered to step down. “Hertha BSC has probably been looking for a great coach for a long time. Pál is a small, nice coach.”

Dárdai was criticized by Schmidt, Bobic and Windhorst.

“That’s not on at all,” Windhorst told the Süddeutsche Zeitung newspaper. “If I were a player, I’d think he doesn’t care.”

On Monday, Bobic told Kicker magazine that it was up to Dárdai how long he stayed as coach in his second stint at the club.

“It always depends on the work that someone does,” Bobic said.

Dárdai made a club record 286 Bundesliga appearances for Hertha as a player. He featured alongside Bobic from 2002 to 2005.

Dárdai then coached the team from 2015 to 2019 when Michael Preetz, general manager at the time, felt he wasn’t ambitious enough to lead Hertha through the expected revolution under Windhorst.

Dárdai played down expectations when he returned to stabilize the team in February. Hertha was two points above the relegation zone after winning only one of its previous eight games.

He is still trying to keep expectations in check seven months later but Windhorst wants to see some return on his investments – preferably in the Champions League.

“It definitely shouldn’t take five to 10 years, but rather two to five,” said Windhorst, who did not rule pumping more money in. “My goal is to bring Hertha to the top. If further investments have to be made for this, I will provide the funds.” 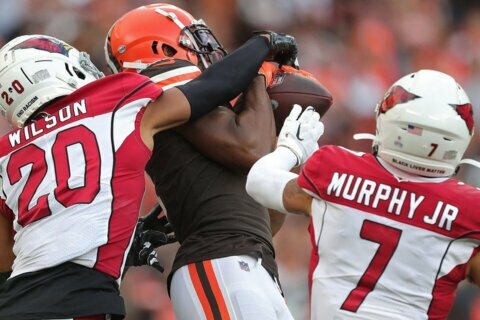