SHEBOYGAN, Wis. (AP) — European captain Padraig Harrington made it clear on the first night together at the Ryder Cup that his players have a place in history, one by one.

For this team, it starts with Lee Westwood at No. 118 and goes down to Bernd Wiesberger at No. 164. The idea was for them to recognize the elite company they are in.

“You sit here as one of the 12 lucky few,” the narrator says. “But you will only stand up and be counted if you know the true worth of your number.”

What follows is a pantheon of Europe’s Ryder Cup greats — including José María Olazábal, Bernhard Langer, Colin Montgomerie and Tony Jacklin — ticking off their spots on the list.

Harrington called it a “startlingly small amount of players.”

The list is alphabetical and chronological, starting with Aubrey Boomer in 1927. It concludes with the three rookies — Viktor Hovland, Shane Lowry and Wiesberger at No. 164.

“It makes it very special for the players to know that they have a place in history that can never be taken away from them,” Harrington said. “It was a lovely way to start the week. We have more.”

Sergio Garcia didn’t realize he was No. 120.

“I’ve always known that being a part of the Ryder Cup team is very difficult, but I didn’t know that only that little amount of players have made it,” Garcia said. “That’s why every time I’m a part of a team — or the rest of our teammates — why we give it the respect that it deserves, because it’s so difficult to be a part of it. It’s an honor, and we treat it like that.”

Peter Ueberroth and Dick Ferris are the first winners of the Lifetime Achievement Award from the World Golf Hall of Fame. They will be honored on March 9 at The Players Championship as part of the 2022 induction ceremony.

Ueberroth and Ferris joined the late Arnold Palmer and Clint Eastwood to buy Pebble Beach in 1999.

“We are pleased to recognize the important and longstanding contributions that Dick and Peter have made to the game of golf through their thoughtful stewardship of Pebble Beach Company,” said Greg McLaughlin, CEO of the World Golf Hall of Fame.

The induction ceremony will feature Tiger Woods and Susie Maxwell Berning being enshrined as players, alongside former PGA Tour Commissioner Tim Finchem and golf course developer and visionary Marion Holls. The ceremony was postponed one year because of the pandemic.

The Saudi International will now be part of the Asian Tour in a 10-year partnership. Still to be determined is whether Dustin Johnson will return to defend his title.

The Saudi International attracted some of the biggest names in golf through big appearance fees and began as a European Tour event. Europe no longer has it on the schedule.

The PGA Tour, as part of its strategy to fend off Saudi Arabia-backed financing to start a new “super league,” recently said it would not provide releases for its members to play any tournament not part of any recognized tour.

The Asian Tour has been on hiatus during the pandemic. But it is one of the six major tours recognized by the Official World Golf Ranking.

The Saudi event is scheduled for Feb. 3-6 at Royal Greens Golf & Country Club. Organizers say the prize money will increase from $3.5 million to $5 million.

Johnson is a two-time winner in the three-year history of the event. The PGA Tour would still have to approve a release for him to play.

The U.S. Ryder Cup team has finalized where the players want to donate $2.85 million, with nine players giving $100,000 to their foundations.

The donation stems from 1999, when David Duval was among those outspoken about players not having a say in what happens to Ryder Cup proceeds. That led the PGA of America to create a program in which $100,000 goes to a charity the players choose and $100,000 to youth golf development programs. The charity also includes the captain and vice captains, who could direct $25,000 to a charity of their choosing.

Daniel Berger directed $50,000 to Mia’s Miracle Foundation, started in honor of Camilo Villegas’ infant daughter, who died in July of cancer. The foundation is to honor her life and help families going through similar circumstances. The other $50,000 went to the St. Jude Children’s Research Hospital. Berger is a two-time winner of the St. Jude Classic in Memphis, Tennessee.

The bunkers at Whistling Straits are so numerous they can be hard to count, and certainly difficult to identify. No need to tell that to Dustin Johnson, who didn’t realize he was in a bunker when he grounded his club in the sand on the 18th hole at the 2010 PGA Championship. The two-shot penalty cost him a spot in a playoff.

For the Ryder Cup, nothing has changed.

The PGA of America has informed players that “all areas of the course that were designed and built as bunkers” will be played as bunkers.

Sand inside the ropes will be raked each morning and refreshed between sessions. Outside the ropes, the sand could be affected by footprints or other forms of traffic. The PGA said “relief without penalty” would not be allowed in those circumstances.

The notice said when in doubt, check with the match official. It also said blue dots might be used to define the edges.

The Chubb Classic will return to Tiburon’s Black course in Naples, Florida, in February as part of a multi-year extension of its contract with the PGA Tour Champions. … Spyglass Hill is being used as part of the Pure Insurance Championship at Pebble Beach this week. The PGA Tour Champions event featuring First Tee participants previously used Poppy Hills. … The South African Open returns to Gary Player Country Club in Sun City as part of the Sunshine Tour and European Tour. … Steve Stricker and Padraig Harrington will meet again two weeks after the Ryder Cup in the PGA Tour Champions event at Timuquana in Jacksonville, Florida. It will be the debut for Harrington on the 50-and-older circuit.

“I don’t feel like playing away is getting any easier. If anything it’s probably getting a little tougher.” — Rory McIlroy on the Ryder Cup. 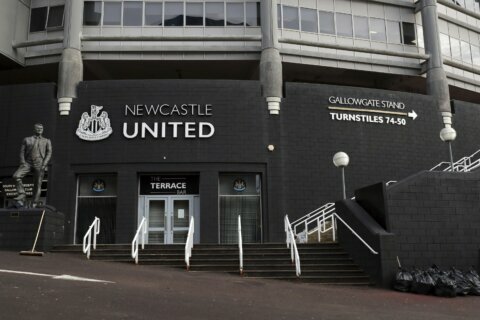 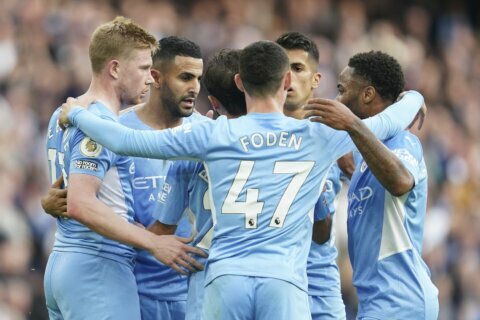 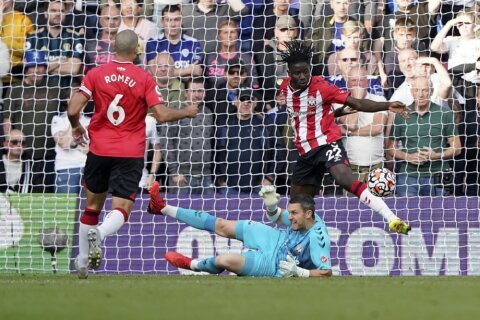