TORSHAVN, Faeroe Islands (AP) — Denmark’s smallest opponent was its toughest yet as the Danes needed an 85th-minute goal to beat the Faeroe Islands on Saturday and keep intact its 100% record in World Cup qualifying.

Denmark was on course for its first scoreless draw after starting the campaign with four wins until Jonas Wind headed in from a free kick with five minutes remaining. The Faeroe Islands had been reduced to 10 men shortly before after Rene Joensen picked up a second yellow card.

That gave Denmark its fifth win from five games and preserved its commanding five-point lead at the top of Europe Group F. Denmark is the only team in European qualifying yet to concede a goal, and its 17 scored are the joint most of any team.

Israel tightened its hold on second place with a 5-2 home win over Austria. Eran Zahavi scored twice, three days after his hat trick against the Faeroe Islands. Austria fought back to 3-2 from 3-0 down before Shon Weissman and Zahavi stretched Israel’s lead again.

Scotland was third in Group F, two points behind Israel, after wasting a string of chances but still beating last-placed Moldova 1-0. 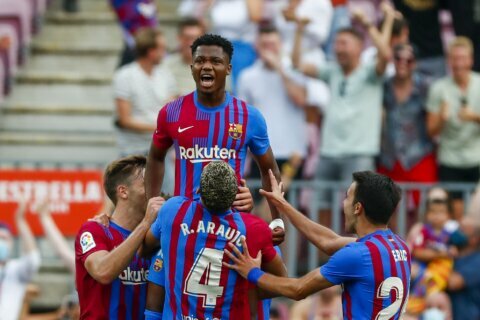