Coronavirus News: Fairfax Co. votes to increase substitute teacher pay | Is it time to get a COVID-19 booster? Which one? | Local cases of COVID-19 | How many in DC region are vaccinated?
Home » Sports » Davis Cup: Garin crushed…

No. 17-ranked Cristian Garin was crushed in 50 minutes and won only one game to seal seeded Chile’s upset 3-1 loss to Slovakia in Bratislava in the Davis Cup World Group on Saturday.

Norbert Gombos, ranked nearly 100 spots lower, also knocked off Nicolas Jarry on Friday on the indoor hard-court to help advance Slovakia to the Qualifiers for a third consecutive time.

Along with No. 5-seeded Chile, No. 6 India and No. 7 Uzbekistan were also beaten in Europe.

India, already 2-0 down to Finland in Espoo, was bundled out after the doubles when former world doubles No. 1 Henri Kontinen and Harri Heliovaara beat Rohan Bopanna and Ramkumar Ramanathan 7-6 (2), 7-6 (2).

Norway hit a bump while leading Uzbekistan 2-0 in Oslo when it lost the doubles. But 10th-ranked Casper Ruud clinched the tie in the first reverse singles by beating 567th-ranked Sanjay Fayziev comfortably and advancing Norway to its highest Davis Cup level.

Also, South Korea’s Soonwoo Kwon clinched a 3-1 win over New Zealand on grass at the Hall of Fame in Rhode Island. South Korea joined Japan and Ukraine, which advanced in March.

No. 1-seeded Belgium was in deep trouble after trailing Bolivia 2-0 in Asuncion, Paraguay. Veteran Ruben Bemelmans and Zizou Bergs, on his Davis Cup debut, won one set between them.

The Netherlands was leading Uruguay 2-0 in Montevideo without having to meet Pablo Cuevas, and Brazil led Lebanon 2-0 in Jounieh.

Only the top eight highest-ranked of the 12 winning countries will participate in the 2022 Qualifiers to try and make the 16-team Finals. The other four will play World Group I elimination matches in November, with the two winners then advancing to the 2022 Qualifiers. 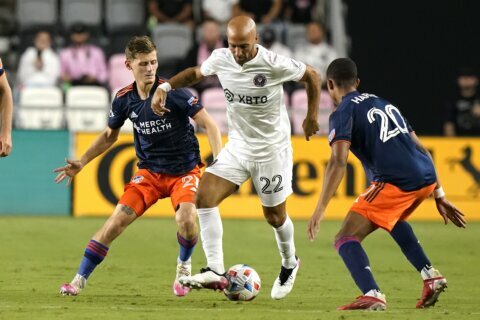