The Canadians rallied from a 14-10 halftime deficit with three successive converted tries to lead 34-14 only to concede a late third try to the Americans.

The teams meet against next Saturday in Glendale, Colorado. The aggregate winner will face Uruguay in October for a place in the 2023 World Cup in France. The loser will meet Chile to determine who progresses to a playoff.

Even after having two forwards sin-binned in the first 20 minutes, penalty-plagued Canada led until the end of the first half when U.S. flanker Jamason Fa’anana-Schultz was mauled over the tryline. The U.S. led 14-10 but lost its most experienced player, No. 8 Cam Dolan, to a head injury.

Also, star U.S. flyhalf AJ MacGinty, expected to be captain, started on the bench after travel complications and didn’t appear until the second half.

But the half was all Canada’s. Tries by flanker Lucas Rumball, center Ben LeSage and wing Brock Webster from an intercept on debut, along with four goalkicks by Peter Nelson, set up Canada to end a 10-test losing run dating to 2019.

The late converted try to replacement back Tavita Lopeti on debut reduced the Americans’ deficit to 13 to make up for in the second leg next weekend. 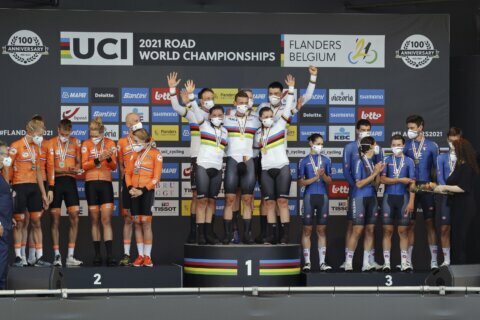