LEUVEN, Belgium (AP) — Julian Alaphilippe confirmed his reputation as one of cycling’s greatest showmen with another bold display of attacking flair that helped him win a second straight gold medal at the road world championship on Sunday.

On a challenging course, the 29-year-old Frenchman relentlessly attacked and made his decisive move on a sharp climb to escape from a breakaway group with 17 kilometers (10.5 miles) to go.

Alaphilippe then took all the risks in the technical bends and short downhills scattered across the finale to retain the world champion’s rainbow jersey he claimed last year in Italy.

Alaphilippe ruined the Belgian fans’ hopes of seeing hot favorite Wout van Aert winning on home soil and received a few boos as he dashed toward the finish line. A few insults were also hurled his way.

“Many fans were rooting for Belgium and van Aert, they asked me to slow down,” said Alaphilippe. “Some of their words were not always very nice. I want to thank them because it made me want to push even harder.”

The 268.3-kilometer course starting in Antwerp and finishing in Leuven took riders across the cycling-mad Flanders region of Belgium, with thousands of fans lining the roads. The route switched multiple times between two circuits featuring a myriad of punchy short climbs and several cobbled sectors suiting one-day classics specialists.

The Belgians were the pre-race favorites with a team featuring the versatile van Aert and rising star Remco Evenepoel alongside experienced all-rounders used to the attritional classic races held in Belgium every year.

Known as “The Tractor” for his huge power input, Belgian Tim Declercq and teammate Yves Lampaert prepared the ground for van Aert, taking turns at the front in a bid to create splits and drop as many rivals as possible. The strategy paid off as a long list of top riders pulled out and the main pack was reduced to 17 contenders in the finale.

The race was marred by a crash involving a trio of top riders in its early stages when Matteo Trentin of Italy, former world champion Mads Pedersen and Italian Davide Ballerini hit the ground with 186 kilometers left. Pedersen was looking behind his back to call his team car when Ballerini and Trentin collided and could not avoid their crash.

The three riders were all able to resume racing but later abandoned.

Quite unexpectedly, the French animated the race with more than 180 kilometers left, with successive attacks by Anthony Turgis and Benoit Cosnefroy that opened a gap and forced their Italian rivals to dig deep in their physical resources to organize the chase.

German Nils Politt later went on the attack and caused another split as a group of 11 riders from 11 different nations, including Evenepoel and van Baarle, moved away. Behind, van Aert and Alaphilippe pushed hard to close the gap before the final ascent of the tough Smeysberg hill.

Alaphilippe attacked near the summit and went away with Italian sprinter Sonny Colbrelli.

The Frenchman’s efforts were not immediately fruitful, though, as Colbrelli could not provide assistance. Determined to avoid a sprint finish, Alaphilippe attacked again with 21 kilometers left but his rivals kept a close eye on him and responded with ease. He made a similar move a few kilometers later, and this time it paid off.

“At some point I told him to follow attacks and to counter, he did the opposite,” France coach Thomas Voeckler said. “He went on the attack on his own several times. He let his instinct speak.” 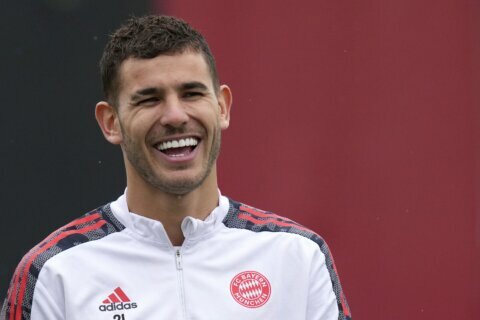