In a race interrupted by a power outage that knocked out the lights for about an hour early in the second stage, Creed swept the stages and led 142 of 163 laps on the 1.25-mile oval.

The 23-year-old California driver wrapped up an automatic spot in the next three-race round of the playoffs, winning for the second time this year and seventh in two seasons.

“My guys put together such a good truck” Creed said. “We’ve been working hard all year and obviously haven’t had the speed at times and I’ve made mistakes at times. But we were able to build this brand new truck and I feel like we’ve taken everything we’ve learned this year and applied it. They gave me a hot rod today and I couldn’t be happier.”

After a caution set up an overtime shootout, Creed kept the No. 2 GMS Racing Chevrolet ahead of Matt Crafton and Ben Rhodes — with three-time series champion Crafton passing ThorSport teammate Ben Rhodes for second.

“I love late-race restarts,” Creed said. “I didn’t want it, but when it came out I was just thinking, `OK, just focus and execute.′ This is huge. I’ve had such a stressful month trying to figure out what I’m doing next year, so many mixed emotions on what I’m going to do and if I’ll even have a ride. Biggest thing is to keep winning and get ourselves in the Championship 4 and execute.”

Stewart Friesen was fourth, with the top four all in the 10-driver playoff field. Carson Hocevar was the only other playoff driver in the top 10, finishing eighth. Hailie Deegan was a career-best seventh.

Regular-season champion John Hunter Nemechek had a flat tire and ended up five laps down in 22nd. Austin Hill was 23rd, Chandler Smith 28th, Todd Gilliland 29th and Zane Smith 35th to round out the playoff drivers.

The playoff field will be cut to eight after the third race and to four after the sixth for the finale at Phoenix Raceway.

The playoffs will resume Sept. 5 at Darlington Raceway, the historic South Carolina track where Creed won in May. 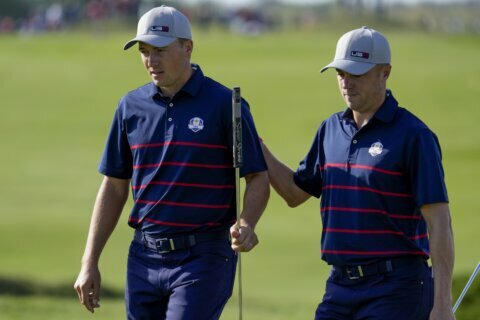