MANCHESTER, England (AP) — Jack Grealish will pull on a Manchester City shirt for the first time in Saturday’s Community Shield clash against Leicester at Wembley Stadium in London.

Whether he makes his City debut is an open question, having just joined the English Premier League champion on Thursday. Where exactly he would play is another question — and manager Pep Guardiola has plenty of options.

“He can play up front, of course, mainly in the left side area, but he can play winger, he can play attacking midfielder, can play striker — many positions with his quality,” Guardiola said Friday.

“We believe he has an incredible future,” Guardiola said.

As the traditional curtain-raiser on the Premier League, the Community Shield is a cross between a competitive match and a preseason friendly in which teams and fans hope no one gets injured. It’s contested by the champions of the league and the FA Cup.

“It’s a wonderful occasion — Wembley, full house, and with a chance to hold something at the end of it is still always important,” he said.

“I’ve always tried to create the mindset, whether it’s a friendly or a competitive game as such, we want to win every game we play,” Rodgers continued. “When you can put your hands on a trophy at the end of it, then of course you would want to be able to do that.”

With the season starting in just over a week, avoiding injuries is a must. Leicester lost center back Wesley Fofana to a fractured left fibula after a late tackle during a friendly against Villarreal on Wednesday.

Rodgers said there won’t be too much to learn from the game “other than seeing where they’re at from a physical perspective.”

“It’s a game where both clubs will be looking for fitness.”

Kevin De Bruyne, recently back with City from national team duty in the European Championship, is unlikely to play. Left back Benjamin Mendy played 90 minutes in a friendly on Tuesday, after being limited to 20 appearances last season due to injury.

Grealish was expected to travel and suit up but seemed more likely to feature as a substitute rather than a starter.

Leicester returns to Wembley after winning its first FA Cup there in May thanks to a strike by Youri Tielemans. The Foxes finished one point out of Champions League qualification, however, in fifth place.

“From where we’re at as a club, my players have emphatically overachieved,” Rodgers said. “If you (look) where we are in terms of budget and everything else, then these players have done amazing. And then to go on and create history last season, for the first time win the FA Cup. That was a fantastic season for us.” 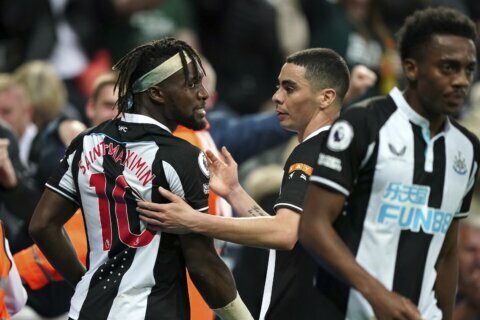