IZU, Japan (AP) — The record-setting women’s pursuit team from Germany and the men’s sprint squad from the Netherlands knocked the powerful British team from their perch atop the track cycling world at the Tokyo Olympics.

Then the world champion Dutch men stopped the Brits’ streak of three consecutive gold medals in the men’s team sprint at the Izu Velodrome.

“We had respect for them,” Brennauer said with her gold medal around her neck, “but we were focused on our race.”

The races for the medals was only the start of the drama.

In the men’s pursuit qualifying, the Italians set a world record in 3:42.307 to edge New Zealand by just 9 hundredths of a second, then watched as world champion Denmark and three-time and defending champion Britain squared off.

Just after the 3,000-meter mark, the Danish team was so far ahead of the Brits — who had to replace injured stalwart Ed Clancy with Charlie Tanfield — that they had pulled up right behind them. But rather than going around Tanfield, who had fallen off the pace, Denmark’s Frederik Madsen ran right into his rear wheel and sent both crashing down.

Madsen was clearly at fault, but that didn’t stop the Dane from standing over Tanfield and berating him. Madsen was still cursing loud enough for the entire velodrome to hear as he headed for the pits.

“There were just so many emotions,” Madsen said, shortly before learning that officials had convened and declared that Denmark had won the race, setting up a match with Italy for the gold on Wednesday.

“I’m not saying things at Charlie,” he added. “I’m shouting because I’m frustrated. I’m just upset at the situation.”

The British were even more frustrated.

“Our understanding was the Danes caused the crash of an opponent,” said their coach, Iain Dyer. “It prevented us from setting at time and progressing to the next heat yet to come.”

The showdown most cycling fans had anticipated in the velodrome actually came in the first-round heats of the women’s team pursuit, where the Olympic champion Brits and the world champion Americans faced off for a chance at gold.

Both were beaten by Germany in qualifying, eliminating any chance of a third straight finals matchup.

The British, swapping Neah Evans into the lineup for Elinor Barker, trailed the first half of the 4,000-meter race before finding another gear. They wound up stopping the clock in 4:06.748 to edge the Americans, who set a national record with a time of 4:07.579, and take down the world record the Germans set the previous day.

Germany promptly took it right back with a time of 4:06.166 that eliminated Italy from medal contention.

That set up a duel between Germany and Britain that was only close for about two laps. The Germans opened a 2-second advantage by the halfway point and nearly caught the British by the time they hit the finish line, giving them ample time to celebrate a gold medal that few who follow track cycling saw coming.

It was the first time that Britain’s Laura Kenny has ever won anything but gold. She was a member of the past two Olympic champion pursuit teams and also has claimed the past two omnium gold medals.

“As an athlete, you want to win everything,” Kenny said. “I am proud of silver. I’m just a little disappointed.”

The bronze medal went to the world champion U.S. team, which easily dispatched with Canada in their race.

“The last year has been so difficult for everybody, filled with so many unknowns,” said American rider Jennifer Valente. “I think we can finally say that we’ve ridden the very best we had, up to this point, and that we’re happy with bronze.”

In the men’s team sprint, the Dutch bunch of Jeffrey Hoogland, Roy van den Berg and Harrie Lavreysen stopped the clock in 41.369 seconds to end Britain’s dominance in the three-lap race. It was the third time in three efforts, beginning with a qualifying ride, that the Netherlands had set the Olympic record.

The new-look British squad of Ryan Owens, Jack Carlin and Jason Kenny led by the slimmest margins after the first lap but was unable to keep up the pace. They finished in 44.589 seconds to claim the silver medal and France took bronze.

The silver medal for Britain was the eighth overall for Kenny, moving the four-time Olympian past Bradley Wiggins for the most Olympic medals. Kenny remains tied with former cyclist Chris Hoy with a record six golds.

“We rolled the dice and just went for it. We knew we had a bit of ground to make up. I had nothing left in the final,” said Kenny, who also will race the keirin and the individual sprint. “I’m really happy with where we are, we’ll give it everything in the next few days and see if we can get something out of that.” 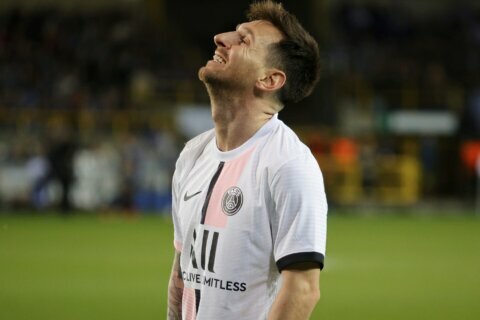