IZU, Japan (AP) — Lasse Norman Hansen kept using the single word “devastated” to describe how he felt after his heavily favored Danish pursuit team lost to Italy in their gold medal race at the Tokyo Olympics.

He’ll probably find a few more joyful ones to describe his golden ride in the Madison.

Hansen teamed with veteran Michael Morkov to win the hotly contested return of the two-man relay to the Olympic track cycling program Saturday, helping atone for that silver medal in a team pursuit earlier in the week.

“In the first half of the race we struggled a bit in the sprints,” Hansen said, “but as the race got harder we came into the fight, and in the end we were just a little bit stronger than the rest.”

Hansen and Morkov won just three of 20 sprints but were consistent enough through the 200-lap race to finish with 43 points. That was three more than Britain, which earned silver on a tiebreaker, and France, which took the bronze.

The much-loved Madison, once a staple of track cycling, returned to the Olympics for the first time since the 2008 Beijing Games. In fact, three riders who took part in the last Madison were still around 13 years later for its return: the 36-year-old Morkov, Kenny de Ketele of Belgium and Germany’s Roger Kluge.

“I’ve been waiting a very long time for this,” Morkov said. “No doubt that this would be my shot at an Olympic medal.”

The race involves teams of two whipping each other around in a relay. One rider is considered in the race at a time, though they can switch at any juncture, and points are awarded to the top four finishers in each 10-lap segment.

It’s a race that requires sprinting ability to gain points, the endurance to ride 200 laps of the 250-meter velodrome — for a total of 50 kilometers — along with tactics, teamwork and just a little bit of daredevil attitude.

That’s because with so many riders at once, and the frequent hand-offs, crashes happen regularly. The American team of Adrian Hegyvary and Gavin Hoover actually took each other out of Saturday’s race just after the midway point.

Also important? Team spotters in the stands, whose constant yelling in a dozen different languages provided a colorful and uniquely Olympic soundtrack for a race requiring total concentration for more than 50 minutes.

Hansen and Morkov trailed Britain by a point at the halfway mark and led the French by a point with five sprints left. They pushed their lead to four with just two sprints remaining — the last worth double points — and wound up taking third in the penultimate sprint and fourth in the finale to secure the gold medal.

The British team of Ethan Hayter and Matthew Walls won the last sprint to catapult into the silver medal. That dropped the French team of Benjamin Thomas and Donavan Grondin to bronze.

The last three medals of the Olympic cycling program will be given out Sunday.

The men’s keirin began controversially when two riders, Britain’s Jack Carlin and Matthijs Buchli of the Netherlands, appeared to have advanced in a rerun of a heat stopped because of a crash they caused. Buchli eventually was relegated, though, and the Rio silver medalist finished third in his repechage to end his day.

“He clipped my elbow. We watched the video back. Our video shows exactly what happened,” Carlin said. “It’s racing. I reacted to someone clipping my elbow. I hope he’s OK.”

Two that did survive last-chance races were Dutch rider Harrie Lavreysen, who already has golds in sprint and team sprint, and defending champ Jason Kenny, who is seeking his British record-setting seventh gold medal and ninth overall.

“Everybody’s desperate to advance. I’m just chuffed to still be in the hunt,” Kenny said. “It’s obvious I’m not the fastest. That doesn’t mean I can’t come away with something. The keirin is the right place, right time kind of thing.”

In the women’s sprint, the past two world champions in Germany’s Emma Hinze and Hong Kong’s Lee Wai Sze swept into Sunday’s semifinals. Hinze knocked out Olympic keirin champ Shanne Braspennincx in the quarterfinal round while Lee beat Katy Marchant, the bronze medalist from the 2016 Rio Games.

Kelsey Mitchell swept past Lauriane Genest to win their all-Canada match, but top qualifier Lea Sophie Friedrich was upset by Ukraine’s Olena Starikova, who won their first race and the decider in their best-of-three quarterfinal.

She was part of the silver medal-winning British pursuit team earlier in the Tokyo Games before joining Katie Archibald in winning the Olympic debut of the women’s Madison. Kenny now has six medals overall and five golds, one behind husband Jason and track cyclist Chris Hoy for the most among British athletes.

This will be the first time she competes in three events at a single Summer Games, though.

“I went into those races hoping to medal and that’s exactly what I’m hoping to do now,” Kenny said. “The natural step for me was to put my hand up for all three, and it’s the same going into the extra event. Hope to come away with a medal.” 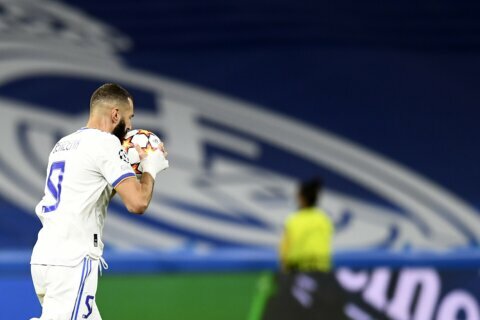