Bayern vs. Gladbach in German Cup, Dortmund vs. Ingolstadt

BERLIN (AP) — Bayern Munich will play at Borussia Mönchengladbach in the second round of the German Cup, while defending champion Borussia Dortmund was given a home draw against second-division Ingolstadt.

Sunday’s draw offers Bayern a chance to make up for its disappointing 1-1 draw at Gladbach in their opening game of the Bundesliga. The clubs have met seven times before in the cup with Bayern winning every time.

Other Bundesliga duels in the second round include Bochum vs. Augsburg, Mainz vs. Arminia Bielefeld and Stuttgart vs. Cologne.

Union Berlin faces a trip to third-division Waldhof Mannheim, while city rival Hertha Berlin was drawn at fourth-tier Preußen Münster. Münster’s participation in the draw came after Wolfsburg was thrown out of the competition for using one substitute too many in its first-round match.

Jesse Marsch’s Leipzig was drawn at Babelsberg. The fourth-tier club is known for its political activities in favor of refugees.

Dynamo Dresden was drawn against St. Pauli, Regensburg against Hansa Rostock, Hannover against Fortuna Düsseldorf, and Nuremberg against Hamburger SV in second-division duels. Schalke faces a trip to third-division 1860 Munich. 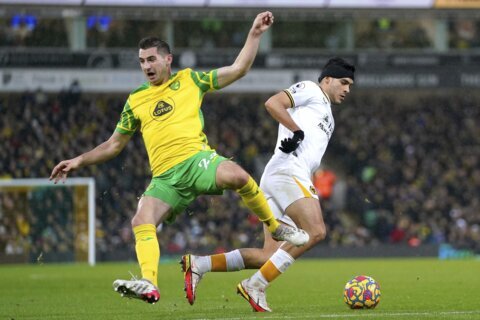