Sabres trade Ristolainen to Flyers; Reinhart could be next

BUFFALO, N.Y. (AP) — General manager Kevyn Adams is just getting started after launching his offseason overhaul of the Buffalo Sabres by trading defenseman Rasmus Ristolainen to the Philadelphia Flyers on Friday.

While stressing a deal hasn’t been competed, Adams confirmed a Sportsnet.ca report he’s had discussions to trade Reinhart to the Florida Panthers.

Reinhart is a restricted free agent and has grown increasingly unhappy with being offered short-term deals during his his seven seasons in Buffalo while not interested in watching the team start over yet again. He’s coming off a season in which he led the team with a career-high matching 25 goals in just 54 games.

With the Sabres also shopping captain Jack Eichel, Adams began his rebuild by trading Ristolainen to acquire the Flyers’ first-round pick in a deal struck hours before Buffalo opened the NHL draft by selecting Michigan defenseman Owen Power with the No. 1 pick. The Sabres then used the Flyers selection, 13th overall, to draft Swedish forward Isak Rosen.

Buffalo also got fifth-year defenseman Robert Hagg and a second-round pick in 2023 as part of the deal while Philadelphia gained a big, bruising boost to its blue line in Ristolainen.

“We certainly look at Ristolainen as someone who can be a big part of our future going forward,” Flyers general manager Chuck Fletcher said after paying a considerable price to land the hard-hitting defenseman who has averaged nearly 24 minutes of ice time during his eight-year career. “We like our defense core. We felt like we had good pieces. But we lacked size and physicality on the back end.”

Fletcher is betting the 6-foot-4, 218-pound Ristolainen improves in what should be a second-pairing role in a more structured system.

The 26-year-old Ristolainen has one year remaining on a six-year, $32.4 million contract, which is being fully picked up by the Flyers.

Ristolainen became expendable after he, Eichel and Reinhart each raised questions about their futures in Buffalo in May after the Sabres finished last in the standings for the fourth time in eight years and extended their playoff drought to an NHL record-matching 10th season.

Ristolainen is looking forward to a fresh start in Philadelphia, which missed the playoffs last season following a second-half collapse.

“We had really tough years in Buffalo. I played a big part. I was one of the leaders there and we couldn’t make the playoffs,” he said. “I’m very excited to go to Philadelphia. I’m going to do anything I can to make the playoffs and make a run there.”

Ristolainen had four goals and 18 points in 49 games with the Sabres last season. Overall, he has 46 goals and 245 points while averaging nearly 24 minutes per game in ice time in 542 career games. From Finland, he was selected by Buffalo in the first round of the 2013 draft.

The Sabres are in flux yet again under new coach Don Granato, and focusing on rebuilding through youth.

“It’s just unfortunate for me being here how often that reset is,” he said following the season. “It’s tough not being able to play meaningful games down the stretch, like I said. I don’t think anyone wants to go through that, no.”

Eichel, the face of the franchise, is on the trade block in part because of a dispute with the team over how to treat a herniated disk that forced him to miss the final two months of the season. Eichel revealed the rift in May by calling it “a disconnect” that has led him to question his future in Buffalo.

Eichel favors surgery while the team is against it because the procedure has never been performed on an NHL player.

Hagg, 26, was in and out of the lineup last season as either the team’s sixth or seventh defenseman and finished with had two goals and five points in 34 games. Selected by Philadelphia in the second round of the 2013 draft, Hagg has 13 goals and 47 points 236 career games. 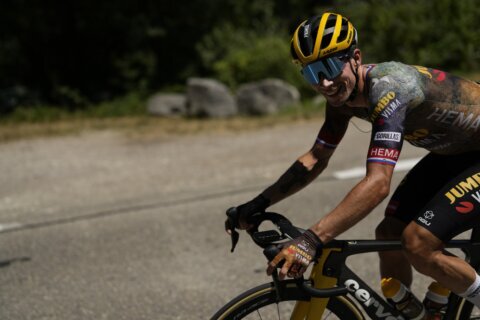