Jones urges new England pack to make a statement vs US

LONDON (AP) — England’s new pack has been urged to begin restoring its reputation, starting on Sunday against the United States at Twickenham.

Even with five in the pack making their debut among eight newcomers in the XV and 12 overall in the matchday 23, the forwards have been compelled by coach Eddie Jones to make a statement in England’s first outing since finishing an embarrassing fifth in the Six Nations.

“We were all disappointed by our pack’s display in the Six Nations,” Jones said. “And this is the first opportunity for England to show that we want to be a pack that’s feared around the world, and we haven’t been.

“We weren’t during the Six Nations, and we want to get that mantle back.”

A great example to copy was the teams’ last matchup in the 2019 Rugby World Cup group stage in Kobe. A fully loaded England dominated up front, and the U.S. had no answer in the scrums and mauls. England won 45-7.

Jones seriously considered fielding seven forwards among his eight reserves on Sunday but went with a 6-2 split.

With 12 England players touring with the British and Irish Lions in South Africa, flanker Sam Underhill has returned to a forward pack he barely recognizes after missing the Six Nations with a hip issue.

Only prop Ellis Genge and lock Charlie Ewels are also capped in a pack which features flanker Lewis Ludlow, the fifth Englishman to captain on debut.

Center Henry Slade has the most caps (38) in a backline pivoting on uncapped halves Harry Randall and Marcus Smith, fresh from leading Harlequins to the Premiership title last weekend. Smith, 22, has been in England training squads since 2018 and Jones has deemed him finally ready to be the team flyhalf, keen to see if he can adapt his superb club form.

Compared to England, the Eagles are experienced with 13 Rugby World Cup veterans in the matchday 23. But this is their first match since then, and they are also giving five players their debut, including three starters.

The U.S. has some overseas pros such as Toulouse prop David Ainu’u, Lyon hooker Joe Taufete’e and Saracens back Will Hooley, but it suffered a major blow when captain and star flyhalf AJ MacGinty injured his knee three weeks ago after helping Sale reach the Premiership semifinals.

MacGinty will be sidelined for up to two months, but the silver lining is he should be available for World Cup qualifying in September and October. Uncapped Luke Carty has the 10 jersey and midfielder Bryce Campbell the armband.

“For us, the important thing is to ensure our younger players are exposed to this quality of competition early and often in their playing career,” U.S. coach Gary Gold said. 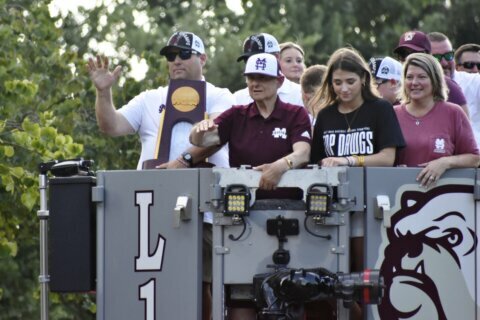