MUNICH (AP) — The in-flight entertainment turned out to be the Spinazzola Serenade.

The loud singing and enthusiastic cheering on Italy’s plane home wasn’t for either of the two players who scored, but for the defender who prevented a goal in the team’s 2-1 victory over Belgium at the European Championship.

“Ole, ole, ole, Spina! Spina!” they sang to Leonardo Spinazzola, some banging on the overhead lockers to keep the beat.

The Italians had plenty to celebrate after reaching the Euro 2020 semifinals with the victory in Munich, but they had also something to commiserate because of the man of the hour was carried off the field on a stretcher and may not be able to play against Spain on Tuesday in London.

“It’s a big loss for us,” said Lorenzo Insigne, who scored Italy’s second goal on Friday. “It’s very sad to see and we’re all trying to get behind him.”

The Italian soccer federation said Saturday that Spinazzola was checked by doctors in Rome.

“If the diagnosis is confirmed (clinical signs of an injury to the left Achilles tendon emerged yesterday), the player will return directly to his club,” the federation said in a statement on its website.

A torn Achilles would mean several months out.

The 28-year-old Spinazzola, who plays for Roma in the Italian league, blocked a second-half chance from Romelu Lukaku on the line with the score 2-1. His teammates hugged and kissed him as if he had scored a goal.

But his game ended a few minutes later after he pulled up sharply while chasing the ball. He was carried off the field in the 79th minute with his hands over his face.

Italy coach Roberto Mancini’s first thoughts after the game were for Spinazzola, the speedy left back who was clocked at running 33.8 kph (21 mph) in the group stage. Mancini said he and the rest of the team were “gutted” by the injury.

Earlier in the tournament, Spinazzola set up one goal in Italy’s opening 3-0 win over Turkey, and another to help the team grind past Austria 2-1 in the round of 16.

Spinazzola took some time to blossom into one of Italy’s best players. Growing up, his hero was Brazilian great Ronaldo, and he started playing forward like his idol. He was 16 when a youth coach at Siena suggested his best chance of progress was at fullback. Spinazzola didn’t agree but he gradually moved further back.

He spent his youth career at Siena and then Juventus. He didn’t make his debut for Juventus’ senior squad until January 2019 after loan spells at six different clubs.

It was in Spinazzola’s second stint at Atalanta that he really began to shine under coach Gian Piero Gasperini, who is responsible for developing several players impressing at Euro 2020.

Spinazzola tore the cruciate ligament in his right knee towards the end of his two-year stay at Atalanta, and that delayed his Juventus debut. He only made one start and four substitute appearances for the Bianconeri before he was sold to Roma at the end of the season. Juventus reportedly had concerns over his physical condition.

A proposed transfer to Inter Milan collapsed last year when the Nerazzurri noted that one of Spinazzola’s legs was slightly shorter than the other. So Spinazzola stayed at Roma and made 27 Italian league appearances and 11 in the Europa League last season.

“Unfortunately we all know how it went but our blue dream continues and with this great group nothing is impossible,” Spinazzola wrote. “I can only tell you that I will return soon! I am sure!” 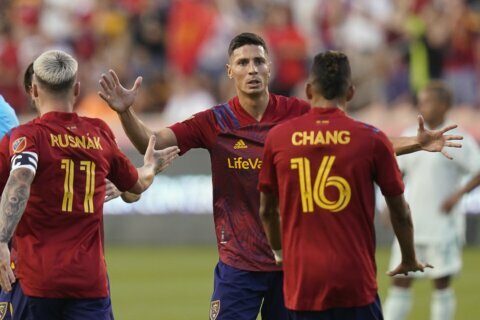