Vanderbilt’s Kumar Rocker and Stanford’s Brendan Beck turned in dominant pitching performances in NCAA super regionals Friday to put their teams on the cusp of berths in the College World Series.

Rocker led the reigning national champion Commodores to a 2-0 victory over East Carolina in Nashville, and Beck held down one of the nation’s top offensive teams in a 15-3 win over Texas Tech in Lubbock, Texas.

No. 1 national seed Arkansas made fast work of North Carolina State in the opener of its best-of-three series, getting a grand slam from Cullen Smith and two homers from Robert Moore in a 21-2 win in Fayetteville, Arkansas. It was the largest margin of victory in super regionals since the tournament went to its current format in 1999.

Rocker was the biggest star of the last NCAA Tournament, and he’s doing his thing again, keeping batters off balance while mixing his mid-90s fastball with a slider and curve.

“I just think he gives us what we need at the time that we need it,” coach Tim Corbin said. “And this is certainly a situation at the end of the year where games are important and they’re closely contested and there’s very little difference between teams. So you need guys that are willing to to get out there and leave it on the field, and he’s done that continually.”

Rocker, who could be the first player taken in the Major League Baseball draft next month, allowed three hits and struck out 11 in 7 2/3 innings in what was probably his final appearance at Hawkins Field. In the regional opener against Presbyterian last week, he threw seven innings of two-hit shutout ball for No. 4 national seed Vandy (44-15).

Rocker in 2019 pitched a no-hitter against Duke in the super regionals and was selected the CWS Most Outstanding Player. There was no NCAA Tournament last year because of the pandemic. He’s now 6-0 in his career in the national tournament with a 0.63 ERA and 64 strikeouts in 42 2/3 innings.

“It’s an opportunity for you to leave it all out there at the moment because it’s coming down to the wire and you’ve got to do what’s best for your team at the moment,” Rocker said of his motivation.

Rocker (13-3) prevailed in the pitcher’s duel with Gavin Williams (10-1), who lost for the first time this season after scattering seven hits and striking out 13 in 7 1/3 innings.

East Carolina (44-16) is in its sixth super regional, and its 30 NCAA Tournament appearances without making it to the CWS is the longest streak of its kind.

Stanford’s Beck (9-1) went to the mound in the bottom of the first inning with a four-run lead. He had 0-2 counts on 18 of the 30 batters he faced and struck out a career-high 13 in 7 1/3 innings. He gave up two runs and was never stressed after the No. 9 Cardinal (37-15) scored four times in the first on a homer by Tim Tawa and three straight RBI singles.

“You go get Beck four runs in the first inning, he showed you why he’s the Pac-12 pitcher of the year,” Texas Tech coach Tim Tadlock said. “He put a pitching clinic on. He was Greg Maddux all day.”

Stanford entered the game 1-8 in its last four super-regional appearances and is going for its 17th CWS appearance, and first since 2008. The No. 8 Red Raiders (39-16) are trying to get to their third straight CWS.

The Razorbacks’ 21 runs were their most in 162 all-time NCAA Tournament games and the most allowed by the Wolfpack in 123.

Moore’s first homer gave the Razorbacks a 2-1 lead in the second inning and his three-run blast in the eighth closed the scoring. Charlie Welch also went deep for the Hogs, whose 106 homers lead the nation.

Patrick Wicklander (7-1) gave up a run and six hits in six innings, and two relievers allowed the Wolfpack (33-18) one hit the rest of the way.

Arizona’s Bullard, who hit one home run in his first 36 games, went deep in the second and fourth innings and has hit six homers in his last six games. He scored after his leadoff triple in the sixth to put the No. 5 Wildcats (44-15) up by three runs. Bullard is 15 of his last 24 (.625) with 12 RBIs.

Donta Williams drove in four runs, three coming home on his bases-loaded double that broke open the game in the eighth inning against the No. 12 Rebels (44-21).

Since the current tournament format went into effect in 1999, 80% (134 of 168) of the teams that won Game 1s in super regionals have advanced to the College World Series.

Stanford, accustomed to playing in cooler conditions in the San Francisco Bay area, didn’t appear to have any problems handling the 107-degree heat in Lubbock.

The Cardinal went ahead and wore their black road tops, which would seem counterintuitive on such a hot day.

“I figured it would be hot in black, white, red, gray,” Beck said. “On the mound, it was hot. I was able to have some quick innings and slow the game down enough to catch my breath.” 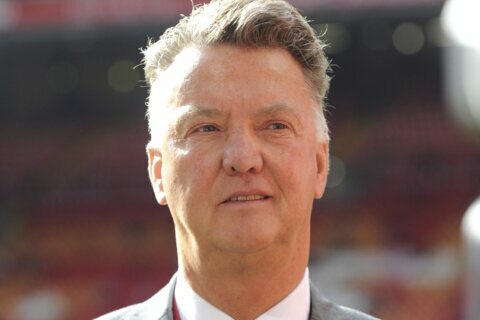