The resurgent Hammers achieved their highest Premier League points total in finishing sixth to earn a spot in next season’s Europa League.

“We have made tremendous progress in the past 15 months and that has been a collective effort from everyone at the club,” the 58-year-old Scot said. “The players really have been superb but the challenge is for our standards to continue developing. We must keep pushing boundaries for consistent improvement as we all aim to continue the growing of the club.”

Moyes has said he hopes to add Jesse Lingard permanently following the end of the forward’s successful loan spell from Manchester United.

Moyes returned to the east London club in December 2019 on an 18-month contract, replacing Manuel Pellegrini with the team just above the relegation zone.

In a seven-month spell in 2017-18, Moyes had helped the Hammers avoid relegation but was passed over for Pellegrini afterward. 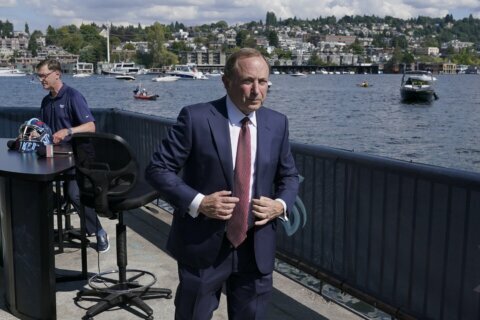 Bettman: Plan is to hold ’22 NHL draft in person in Montreal

NBC quickly hires Maria Taylor after her departure from ESPN