BRIDGEVIEW, Ill. (AP) — Jonathan David had the second hat trick of his international career to lead Canada over Suriname 4-0 Tuesday night and advance to a second-round matchup against Haiti in World Cup qualifying in North and Central America and the Caribbean.

No. 70 Canada will play a two-match, total-goal series against 83rd-ranked Haiti on Saturday and June 15 for a berth in the eight-nation regional final round along with the the 20th-ranked United States, No. 11 Mexico, No. 45 Jamaica, No. 50 Costa Rica and No. 67 Honduras.

The other two second-round matchups have No. 69 El Salvador against No. 135 St. Kitts and Nevis, and No. 76 Curaçao against No. 78 Panama.

David, a 21-year-old forward who was born in Brooklyn, New York and plays for the French club Lille, assisted on the opening goal by Alphonso Davies in the 37th minute. David scored off passes from Davies in the 59th and 67th minutes, then converted a penalty kick in the 77th after he was fouled by goalkeeper Warner Hahn.

David, who also had a hat trick against Cuba in the 2019 CONCACAF Gold Cup, has 15 goals in 14 international appearances.

In a game moved to the former home of Major League Soccer’s Chicago Fire due to Canadian government coronavirus travel restrictions, Davies got his ninth international goal, his fourth in qualifying.

Canada has not reached the World Cup since 1986 and has not advanced to the final round of qualifying since 1998.

El Salvador (3-0-1) won 3-0 over Antigua and Barbuda (2-1-1) in San Salvador to finish atop Group A,. Toronto defender Eriq Zavaleta scored in the 40th minute, David Rugamas added a goal in the 68th, eight minutes after entering, and Walmer Martinez of second-tier Hartford got the final goal in the 85th.

Panama (4-0) won Group D with a 3-0 victory over the Dominican Republic (2-1-1) at Panama City. Nashville midfielder Aníbal Godoy scored in the eighth minute, his second international goal and first in seven years, and Édgar Bárcenas added a goal in the 67th and Cecilio Waterman in the 86th.

Each team will play 14 matches in the regional finals, which start Sept. 2 and run through March 30. The top three nations qualify for the 2022 World Cup in Qatar and the No. 4 team advances to a playoff against another confederation. 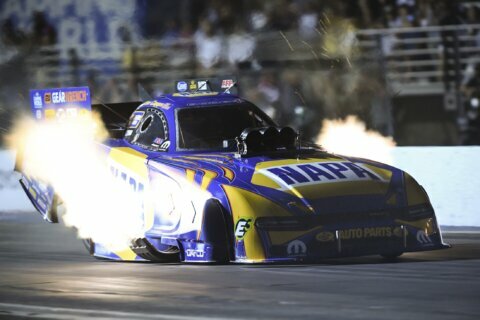