NEW YORK (AP) — Brad Cox insisted he wasn’t sitting around waiting or worrying about whether a disqualification of Bob Baffert’s Kentucky Derby winner would give him his first victory in a Triple Crown race.

Essential Quality captured the Belmont Stakes on Saturday to make sure Cox wouldn’t need to wait a second longer to be a Triple Crown-winning trainer.

The striking gray colt who was bet down 6-5 as the favorite passed early leader Hot Rod Charlie around the final turn and charged ahead to the wire to win the 1 1/2-mile $1 million race in front of 11,238 mostly maskless fans at Belmont Park.

Cox could be a Derby champion with Mandaloun if Baffert-trained Medina Spirit is disqualified for failing a postrace drug test. Two samples have confirmed the presence of the steroid betamethasone, though Kentucky officials have not yet announced the horse’s disqualification — a move that would elevate Mandaloun to the top spot.

“I thought it benefitted our horse,” Cox said. “Hot Rod Charlie ran a tremendous race and I thought (with) the hot pace we were in a good spot where they would come back.”

Essential Quality, who opened as the 2-1 favorite, paid $4.60 to win, $3 to place and $2.60 to show. Preakness winner Rombauer was third and Known Agenda fourth.

“That was a long way around there a mile a half, but it was exciting,” Cox said. “It looked like the horse on the inside, he still had run left. I knew it was going to be a battle down the lane.”

Essential Quality finished fourth as a beaten favorite in the Kentucky Derby because of a rough trip. Essential Quality showed in the Belmont why he has long been considered one of the top 3-year-olds in the country.

“He has never run a bad race in his life, and I think he showed today he met the test of a champion,” said Jimmy Bell, president of Godolphin Stable that owns Essential Quality. “To do what he did as a 2-year-old and come through these races as a 3-year-old with the mile-and-a-half classic, it’s a great tribute to him.”

Backdooring his way to becoming the first Louisville-born trainer to win the Kentucky Derby wouldn’t allow Cox the same joy of victory as the Belmont, which the up-and-coming star will likely remember as his first true Triple Crown triumph.

And Cox saw this coming. He predicted last summer that Essential Quality would be his horse for the Belmont, and that proved true in beating a tough field of seven other horses.

“Luis did a fantastic job of getting him in position turning for home and he was able to really show his stamina late,” Cox said.

It was something of redemption for Saez, who thought he had his first Triple Crown win finishing first in the 2019 Derby with Maximum Security. But Maximum Security was disqualified for impeding other horses.

There was no DQ this time.

“This is my second home,” said Saez, who dedicated the race to the memory of his younger brother Juan who was killed in a riding accident in 2014. “This was the race I wanted to win.”

But the victory also comes with a shadow hanging over United Arab Emirates ruler Sheik Mohammed bin Rashid Al Maktoum, who runs the Godolphin. Sheik Mohammed faces scrutiny of human rights issues after a judge in England ruled that he orchestrated the abductions of two of his adult daughters.

Talking only about his ownership and not the situation in Dubai, Cox made it a point to mention Sheik Mohammed moments after the Belmont.

“Sheik Mohammed, he’s been supporting us the last two years and this is a tremendous organization, world-class organization and we wouldn’t be here obviously without this horse and his support, so I just wanted to really thank him,” Cox said.

The race was run without a horse trained by Baffert, who was banned by the New York Racing Association after Medina Spirit tested positive and ran third in the Preakness. Churchill Downs suspended Baffert for two years after an second sample from the Derby came back positive for betamethasone, which is prohibited at any level on race day in Kentucky, Maryland and New York.

Cox was confused why he kept getting asked about the pending Derby DQ.

“I don’t wait at all,” Cox said this week. “I can’t control the outcome of that, so it’s something I give very, very little thought to.”

Normalcy returned to the Belmont after a topsy-turvy 2020 that featured the race leading off the Triple Crown at a nontraditional 1 1/8-mile distance at an empty racetrack. The race was back in its traditional spot as the third leg of the Triple Crown five weeks after the Derby and three after the Preakness, was back to its “test of the champion” distance with fans roaring for horses at the top of the stretch. 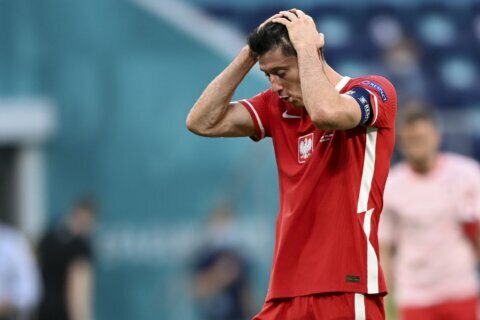 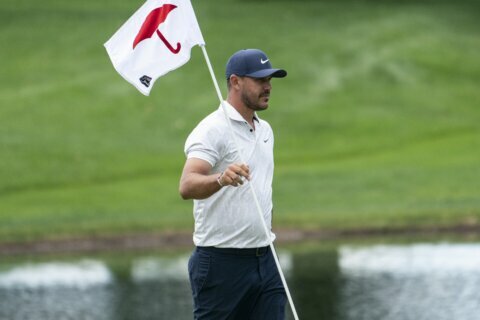