“I just decided to swing and not be defensive, and good things happened,” Factor said of her sixth home run of the season.

Carrie Eberle gave up just one earned run in a complete game victory for the Cowgirls (48-10). She scattered seven hits, struck out two and walked one.

It was Eberle’s first World Series appearance, and the first-team NFCA All-American handled business in front of what amounted to a home crowd. The Cowgirls were playing about 60 miles from campus, and orange was plentiful in the stands.

“This is what I’ve always dreamed about doing,” she said. “To be able to be here with these people around me is awesome. Our fans were great today. We’re going to need them again tomorrow. It’s really just an experience that you can’t really describe.”

It was a typical performance for her.

“Carrie is just Carrie,” Oklahoma State coach Kenny Gajewski said. “She’s just a grinder. She just never gives in. I’m just so thankful that she’s on our side. It’s really cool to see her perform. Her teammates care about her. They want to play well behind her.”

Oklahoma State advanced to play James Madison, which stunned No. 1 seed Oklahoma 4-3 earlier in the day, in a winners bracket on Friday. The winner of that contest will need one more victory to reach the best-of-three championship series.

Georgia (34-22) will play Oklahoma on Saturday in an elimination game. Oklahoma won its first 33 games this season before losing at Georgia.

Georgia isn’t worried about basically being the road team again.

“They can bring as many fans as they want out there,” second baseman Sydney Kuma said. “I still think we’re going to pull together and we’re going to fight.”

With Oklahoma State up 2-0, Georgia’s Sara Mosley singled and Kuma barely beat a throw to the plate to make it a 2-1 game in the top of the sixth.

Alysen Febrey, a first-team NFCA All-American who transferred from Georgia after the 2019 season, singled in the bottom of the inning to score Kylie Naomi and push Oklahoma State’s lead to 3-1.

Ellie Armistead doubled and knocked in Jaiden Fields in the top of the seventh, bringing Georgia within a run with a runners on first and third and one out.

Eberle got Savana Sikes to pop out. Oklahoma State third baseman Sydney Pennington charged a slow hopper and fired to first for the final out. 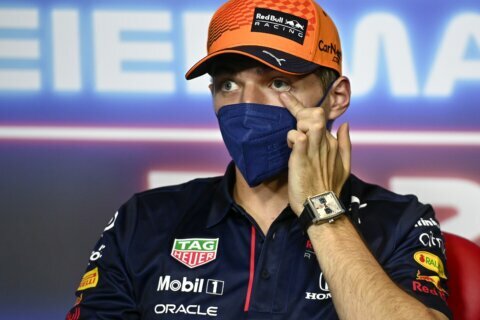