UNIONDALE, N.Y (AP) — Mathew Barzal broke a tie late in the third period and the New York Islanders beat the Boston Bruins 4-1 on Saturday night to even the second-round playoff series at two games apiece.

Game 5 is Monday night in Boston, with Game 6 back at Nassau Coliseum on Wednesday night.

The Islanders took the lead when Scott Mayfield’s point shot was redirected and deflected off Charlie McAvoy in front and Barzal batted the puck out of the air and past Rask with 6:57 left. Barzal scored for the second straight game after going scoreless for the first eight games of the postseason.

Boston pulled Rask for an extra skater with 1:12 left. Cizikas — who had the overtime goal in Game 2 — sealed it with an empty-netter nine seconds later, and Pageau added one with three seconds to go.

TAMPA, Fla. (AP) — Nikita Kucherov and Steven Stamkos each had two goals and an assist and Tampa Bay beat Carolina to take a 3-1 series lead.

Andrei Vasilevskiy made 21 saves to help the defending Stanley Cup champion Lightning improve to 10-0 in games following a playoff loss over the past two postseasons. Game 5 is Tuesday night at Carolina.

Each team scored four goals in the second, with the Lightning turning a 4-2 deficit into a 5-4 lead. Stamkos and Kucherov scored on the power play and Tyler Johnson also beat Petr Mrazek in the final 5:22 of the period.

Teuvo Teravainen, Jesper Fast, Dougie Hamilton and Jaccob Slavin scored in the second for the Hurricanes. 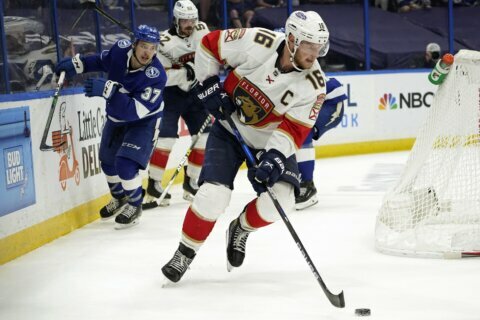