Jacob escaped a jam in the fourth inning after giving up a lead-off triple to Dylan Crews and loading the bases, but he got stronger as the game progressed, retiring the last 13 batters he faced. Jacob entered the game with a 1.46 ERA and 47 strikeouts in his last five starts — a run that started with his no-hitter against Pepperdine on April 16.

The Bulldogs (34-17) advanced to face No. 14 overall seed and regional host Oregon on Sunday. The Ducks beat Gonzaga 10-3 in Eugene on May 18, the only time the teams faced each other during the season.

The Tigers (34-23) had their first opening game loss in an NCAA regional in 36 years and will face No. 4 seed Central Connecticut Saturday in a loser-out game. It could be the last game for LSU coach Paul Mainieri, who announced last week he would retire after a combined 39 seasons at St. Thomas, Air Force, Notre Dame and LSU. Mainieri’s 1,501 career wins are most by an active coach and seventh all-time. 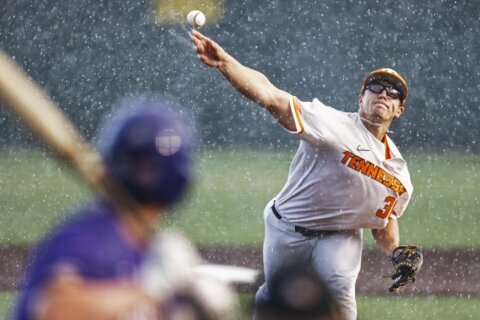