The New York Red Bulls are emblematic of a growing youth movement in Major League Soccer.

The team has one of the most talked-about young players in the league in 17-year-old Caden Clark. The native Minnesotan has three goals already this season for the Red Bulls.

“All the media is great, I think it’s really cool to see someone talk about your name on ESPN,” he said. “It’s cool, but to be honest, I don’t think, ‘Wow.’ I just kind of stick to it, stick to the game.”

The joke was always that MLS was a “retirement league” where aging stars from Europe played in hopes of a career revival or a few more paydays. But that has largely been the exception rather than the rule over the past five years with the league’s average age trending downward.

At the end of 2020, the average age was 26 years, 39 days. To start this season, it was 25 years, 217 days. Last weekend, Reed Baker-Whiting made his debut for the Sounders at 16 years and 46 days, putting him among the top five youngest players to appear in a game in MLS history.

The Red Bulls have the league’s youngest roster, with an average age of just over 23.

Commissioner Don Garber pointed to the evolution of MLS — from the pioneering international stars including Roberto Donadoni of the league’s early days, to the World Cup-driven emphasis on Americans like Landon Donovan, to the advent of the designated player with David Beckham and Thierry Henry.

“We are now at the youngest we’ve ever been on average in the history of the league, we’re investing deeply in developing players’ academies in every particular market,” Garber said. “And now you have to have programs that could provide opportunities for young players to be able to perform at their highest, develop at their youngest and then ultimately build a professional career.”

While developing young players is one thing, keeping them is another. European teams have come calling for talented players like Alphonso Davies, Tyler Adams and Weston McKennie.

In addition to Clark, here are some of the other young players, all 20 or younger, to look for in MLS this season:

A 19-year-old midfielder for the Colorado Rapids, Bassett has a pair of goals this season. Signed as a homegrown player in 2018, Bassett, along with 21-year-old teammate Sam Vines, is among the so-called “RapKids” who came from the team’s development academy.

“Cole is certainly someone who has blossomed in the last year, year and a half. His understanding is getting better, his willingness and desire to get in front of the goal is really something that drives him, and obviously we’re benefitting from that,” coach Robin Fraser said.

The 17-year-old phenom was the youngest player to sign with the San Jose Earthquakes when he inked a homegrown player contract at 15. A forward from Ceres, California, Cowell has two goals, to go with three assists, this season. He was named the MLS Player of the Week earlier this season after a game-winner against the LA Galaxy.

“I definitely feel a lot more comfortable on the ball and I feel more freedom to make mistakes and not try to be so perfect. That definitely helps, but up top is pretty fast. I try and play as quick as possible. I’m still learning how to do one-touch passes, checking in, and all that,” Cowell said. “But I definitely am more comfortable the more I play so that helps a lot.”

Alvarez hasn’t yet turned 19 and this is his fourth season with the Galaxy. A native of Los Angeles born to Mexican parents, Alvarez was called up to the Mexican national team last month for a game against Costa Rica. Recently there have been rumors that Liga MX club Chivas is interested in him.

And he’s got this going for him: Zlatan Ibrahimovic once said Alvarez is “by far the biggest talent” of anyone in MLS.

An 18-year-old midfielder for Sporting Kansas City, Busio signed with the club when he was 15. Hard to believe he’s been in the league since then — he’s one of just seven MLS players to have made 50 appearances for his club before his 19th birthday. Busio has started all of Sporting’s matches this season and scored in a 1-1 draw with Orlando.

“I love the way that he goes about his business. He’s always up for a challenge,” Sporting coach Peter Vermes said. “That’s what’s great about him and he can find his way. He is just a pure soccer player. That’s why he can move around the field like he does and perform the way he does. He’s just an incredible kid. He’s got a great mentality and he’s got a great soccer IQ.” 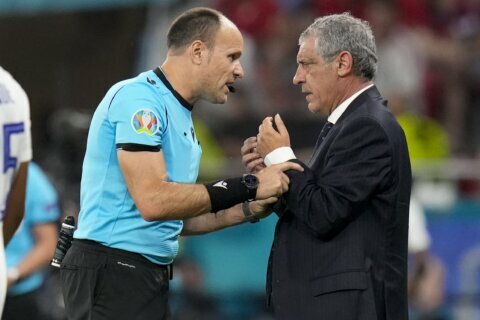