BAGNO DI ROMAGNA, Italy (AP) — Italian cyclist Andrea Vendrame held off the rest of the breakaway pack to win the 12th stage of the Giro d’Italia on Thursday for his first victory in a Grand Tour and Egan Bernal kept the leader’s pink jersey.

Vendrame, who rides for AG2R Citroën, edged out Chris Hamilton in a sprint at the end of the 212-kilometer (132-mile) route from Siena to Bagno di Romagna that featured four categorized climbs.

“What an incredible feeling. I can’t even speak or find the right words to describe how I feel now,” the 26-year-old Vendrame said. “After a difficult period where I had an injury, this win at the Giro is something indescribable.”

There was also a sprint for third, with Gianluca Brambilla narrowly beating George Bennett, but only after a late swerve that left Bennett throwing up a hand in frustration. Brambilla was later relegated to fourth.

The duo finished 15 seconds behind Vendrame.

All four had been part of a large breakaway.

Bernal crossed the line in the peloton to maintain his 45-second lead over Aleksandr Vlasov. Nobody else is within a minute of the 2019 Tour de France winner, with third-place Damiano Caruso 1:12 behind.

Vincenzo Nibali attacked over the top of the final climb and finished seven seconds ahead of the peloton. The two-time Giro winner is still more than four minutes behind Bernal.

Friday’s 13th stage is an entirely flat 198-kilometer (123-mile) route from Ravenna to Verona that pays tribute to writer and philosopher Dante Alighieri on the 700th anniversary of his death. It will also give the riders a break before hitting the high mountains the following day.

“It was a really hard day for everyone so we are happy because we have finished well, but it was a really tough stage,” Bernal said. “It’s a Grand Tour, and for the GC guys there is no easy stage, you know, we need to go for every day. So for tomorrow we need to be really focused.”

A number of riders abandoned the race during the stage. Marc Soler and Alessandro De Marchi crashed in separate incidents, while Gino Mader, Kobe Goossens, Faisto Masnada and Alex Dowsett all retired due to illness and injury.

Soler tried to continue before eventually conceding. De Marchi was taken away in an ambulance.

“Dema was taken to hospital and was diagnosed with a broken right collarbone and six broken ribs,” said De Marchi’s team Israel Start-Up Nation. “He also broke his first and second thoracic vertebra.

“He did not suffer any head injury, but does have to stay in the hospital for at least one night.” 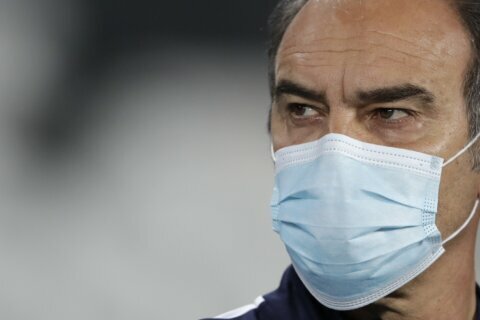