Stricker not sure if Tiger available as Ryder Cup assistant

KIAWAH ISLAND, S.C. (AP) — Steve Stricker would love to have Tiger Woods at Whistling Straits as one of his assistant captains. He just doesn’t know if Woods will be available for duty four months from now.

Stricker says he was recently on a zoom call with Woods — topic not disclosed — and said his spirits were great and he seemed to be in a better place while recovering from multiple leg injuries from his Feb. 23 car crash in Los Angeles.

“I don’t know if were are there yet to commit to him being there,” Stricker said. “We were on a Zoom call with him just this last week and he seems like he’s in a better place. Like I said, though, he’s still got some ways to go.”

Stricker would love to have him, which seemed obvious. Woods was an assistant captain to Davis Love III in the 2016 Ryder Cup and to Stricker in the 2017 Presidents Cup. He played in the Ryder Cup in 2018 and was playing captain in the Presidents Cup the following year.

“The guys really respect him and he did a great job — obviously as a captain — but he was an assistant captain of mine in 2017 of the Presidents Cup and he was unbelievable. He would do anything for you and he’s totally, totally vested in the situation and the process and almost to the point of he’s on it early and so much.

“I’d love to have him be there if it’s at all possible.”

Stricker already has appointed Love, Jim Furyk and Zach Johnson as his assistants for Whistling Straits.

He said Woods has told him he doesn’t know if he can be there, but that “I’m here for you all the way up to the Ryder Cup.”

“That shows his level of commitment to me, to the team, and his desire to be there if he can be,” Stricker said.

Collin Morikawa didn’t realize until later that one of the perks to winning the PGA Championship is hosting a dinner for all the past champions.

It’s a tradition like one other, just not as buttoned up. Players can invite their spouses or girlfriends, and PGA of America officials are invited.

Morikawa was in charge of the menu.

“I gave people the option of fish or fried chicken, so either you go healthy or you don’t go healthy,” Morikawa said. “And then we had a bunch of porterhouses on the table. Everyone was loving that, just to kind of pick on. It’s a great family style.”

Morikawa also was in charge of gifts for all the champions (the PGA of America picks up the tab). As much as he loves food, he gave the PGA champions a barbecue tool set, a separate box of barbecue spices and an apron that had the Wanamaker Trophy on the front and a photo of his dog coming out of the top.

There was a twist to this dinner. Because it was not held at Harding Park due to COVID-19 protocols, the 2019 champion hosted a cocktail reception.

Brooks Koepka, who had won at Bethpage Black, gave the champions a corn hole game with his signature on the the boards.

Those were the gifts. Morikawa didn’t share the stories, but it all sounded delightful.

“It was so cool to talk to a bunch of champions, not just champions that I know, but just guys that are older that aren’t on tour anymore, just to kind of hear stories from them,” he said. “It’s a really meaningful night.”

Steve Stricker would love to make it to the PGA Tour’s postseason one last time. He is playing more often on the regular tour to keep tabs on potential Ryder Cup players. He contended in the Phoenix Open (tie for fourth) and did well at the Honda Classic (tie for 13th).

That means the 54-year-old Stricker is going to play more on the PGA Tour. For starters, he will not be defending his title at the U.S. Senior Open, instead playing the John Deere Classic. Stricker is a three-time champion at the TPC Deere Run.

He also is thinking about the Travelers Championship, the Rocket Mortgage Classic in Detroit and possibly an opposite-field event, the Barracuda Championship, before going to the Wyndham Championship. That’s the final event of the regular season.

“So I’ll hopefully get in about four more after this one to try to sneak in the playoffs,” he said.

That would give him full status for another year on the PGA Tour, and at least secure a spot in The Players Championship.

Brandon Hagy was on the Ocean Course on Wednesday, even though he might not tee it up. He is the first alternate, though there has been no indication of anyone pulling out.

If the PGA Championship were to start Thursday with 99 of the top 100 in the world, it will match the record for most players from the top 100.

The lone player from top 100 not at Kiawah this year is Matthew Wolff, who withdrew a few weeks ago. 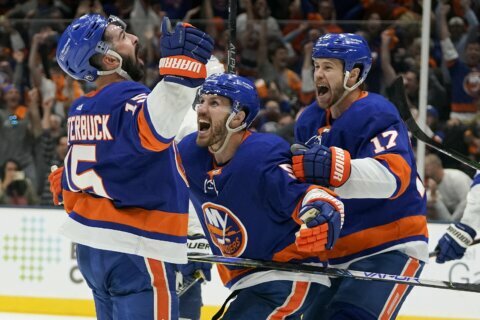