KIAWAH ISLAND, S.C. (AP) — Louis Oosthuizen is in position at the PGA Championship to win his second career major — again.

Oosthuizen shot a steady 4-under 68 for a share of the lead with Phil Mickelson at 5-under 139 through two rounds at the Ocean Course.

Yes, the South African won the British Open in 2010. Yet the questions persist about whether this is finally the time he’ll break through again.

“Look, it’ll be great to get a second major,” he said. “There’s a lot of golf left and I just feel whenever I get to a major, I sort of have my game where I want to have it and mentally, I feel very strong at a major week.”

That’s certainly been the case the past two days.

After an opening 71 that kept him near the top, Oosthuizen had a solid, steady round as wind off the Atlantic sent many other competitors spiraling.

Oosthuizen had five birdies his first 12 holes to get to 6 under and move past Mickelson for the lead. The lone mistake came on the final hole as he sent his approach shot just over the green and could not save par.

It left Oosthuizen in a very familiar position at a major where he and Mickelson, a five-time major champion, are the final pairing.

“I know how to deal with or know what I have to do,” Oosthuizen said. “I am definitely comfortable playing in majors now than before. Hitting it well and knowing your game is there, it makes it a little less stress.”

Oosthuizen won’t dwell on the missed chances. And there have been several. He fell in a playoff to Bubba Watson at the Masters in 2012.

Three years later, Oosthuizen was beaten in another major playoff at the British Open where Zach Johsnon prevailed.

“I don’t think it’s a case of not being able to or thinking that I can’t get the second,” he said. “It’s just both times, I was outplayed.”

It looks like it would take a very special effort to outplay Oosthuizen this weekend. But the PGA Championship leaderboard is filled with the game’s very best.

Mickelson, at 50, has called on his enormous talents to handle a course that’s battered plenty of competitors this week.

A stroke behind was Brooks Koepka, a four-time major champion who won the PGA title in 2018 and 2019.

Tied for fourth and two shots back was Japan’s Hideki Matsuyama, who won the Masters for his first major title last month.

But Oosthuizen believes he’s gotten some old, positive feelings about his game. He’s drove it well this week, keeping his ball out of the marshes, scrub brush and sand dunes that have sucked up many shots this week.

“Drove it as good as I can drive it and ball-striking was pretty good with the irons,” Oosthuizen said of Friday’s round. “With really windy conditions, you need that ball-stroking to be on song.”

As well as Oosthuizen has played this week, he understands the challenge of carrying his game through to the end. Nothing is won before the final putt drops, something few understand at majors better than Oosthuizen.

“You still need to hit the shots and play in the moment,” he said. “And play well.” 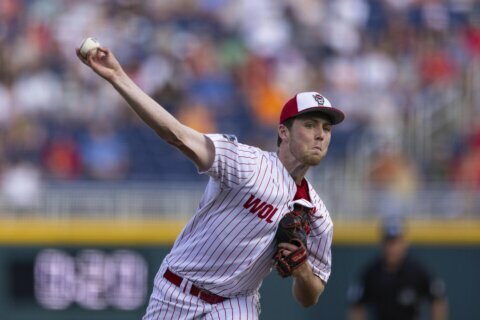