ANAHEIM, Calif. (AP) — The Anaheim Ducks’ playoff drought has reached three seasons because they were the NHL’s worst offensive team for the second time in three years.

The Ducks can’t score, and so they can’t win. That’s the root of the worst season in franchise history by points percentage, and the source of Anaheim’s longest playoff drought since 2002.

Along with an NHL-low 124 goals this season, the Ducks even had the worst power play in modern NHL history, scoring just 8.9% of the time.

Some help has arrived in the form of Trevor Zegras, Jamie Drysdale, Max Comtois and Troy Terry. But Anaheim’s young talent has a very tall task ahead just to carry this team to mediocrity on the offensive end of the ice.

And until they figure it out, the Ducks aren’t going anywhere.

“We haven’t had much success over the last few years, so when that builds up over time, more than likely something is going to change,” goalie John Gibson said Tuesday. “I wouldn’t be surprised if something changes. I think we need to be at least contending for a playoff spot.”

If Ducks owner Henry Samueli is contemplating a wholesale leadership change, he is hiding it awfully well. General manager Bob Murray appears to be the person who will make the Ducks’ high draft pick after they finished with the NHL’s second-worst record, and coach Dallas Eakins seems safe to return for his third season.

And while the Ducks managed to win only 17 games — fewer than every team except Buffalo — their veteran core has expressed little discontent with a lost year of its collective career.

“Very optimistic,” forward Adam Henrique said. “With the way this year was, with the hopes of getting back to more of a normal year, things could maybe settle in a little more on a day-to-day lineup basis. I’m optimistic for the team, certainly.”

Gibson sounded a bit more like his team’s fans when asked about his own level of optimism for the Ducks, who have provided truly terrible goal support for their netminder during three years of his playing prime.

“I mean, I love it here,” he added. “I love the city. Love the fans. But at the same time, I want to win, so obviously I think we’ve got to start taking some steps forward and trying to figure out what’s needed to make that happen. Nobody wants to lose, but it seems like the last few years, we found ways to lose games, put ourselves behind the 8 ball and maybe be a little comfortable with losing. We have to figure out what’s the best plan of action to change.”

The Ducks had little confidence with the man-advantage, and it was reflected in their puck movement and shot selection. Eakins’ staff was unable to find a solution, particularly while playing without injured defenseman Hampus Lindholm.

If Eakins returns in the fall, it’s no stretch to say his job security should be tied to fixing his team’s inept power play.

Getzlaf’s eight-year, $66 million contract ends this summer, and the long-serving captain has not re-signed or retired. The 35-year-old center kept his options open in his exit interview, saying he would talk to Samueli and Murray before making a decision.

“There’s things I want to address with me and my family going forward,” Getzlaf said. “This organization has always been in my heart. I’ve always been here. So we’ll definitely see how the summer goes, and my discussions with Bob, and if he wants me back.”

Getzlaf’s game has changed with age, but he remains a clever playmaker and a strong captain. If he retires or leaves, the Ducks would need a recalibration of their on-ice leadership.

Getzlaf’s deal and David Backes’ contract are off the books, and Corey Perry’s buyout figure drops considerably. It all adds up to more salary cap flexibility than Murray has given himself in many years.

The Ducks have the room to sign free agents, and the young prospects to compete for proven talent in trades. The big question is whether Murray can get it done.

Ryan Miller ended his four seasons as Gibson’s backup by announcing his retirement last month. The crease has been the strongest area of the ice for Anaheim over the past three years, but the Ducks seem equipped to keep it solid from within.

Miller’s departure opens an opportunity for Anthony Stolarz, the 27-year-old netminder who posted a 2.20 goals-against average and a .926 save percentage in eight appearances as Anaheim’s third-stringer this season.

While Murray is still in charge, one of his top lieutenants just retired. David McNab had been in Anaheim’s executive since the franchise’s founding nearly three decades ago under Disney’s ownership and his departure as the senior vice president of hockey operations will open an opportunity for Murray to bring in fresh ideas, if he wants them. 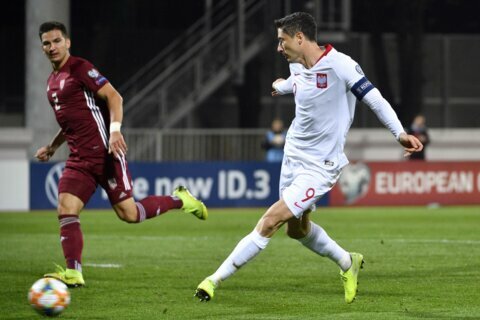