BERLIN (AP) — Bayern Munich star Robert Lewandowski equaled the Bundesliga record of 40 goals in a season and Augsburg, Mainz and Hertha Berlin all clinched survival in the penultimate round on Saturday.

Augsburg secured top-tier status with a 2-0 win over relegation rival Werder Bremen, which dropped into the playoff place ahead of the last round. Augsburg moved five points clear of Bremen in the relegation zone.

Arminia Bielefeld moved a point above Bremen after drawing against Hoffenheim 1-1.

Both Bielefeld and Bremen can still be overtaken by Cologne, which is a point behind Bremen after battling to a scoreless draw at Hertha.

That was enough for Hertha to move to four points clear of the relegation zone, ensuring its survival after a season that didn’t go to plan. Hertha had been targeting European qualification.

Mainz is also safe despite not playing on Saturday. Bo Svensson’s team hosts Borussia Dortmund on Sunday but cannot be caught in the Bundesliga even if it loses its last two games.

Eintracht Frankfurt’s hopes of Champions League qualification were dealt a blow after losing at last-placed Schalke 4-3. It was just Schalke’s third win all season and it left Frankfurt fifth, a point behind German Cup winner Dortmund, which still has two games to play. The top four qualify for Europe’s premier club competition.

Bayer Leverkusen qualified for the Europa League after drawing with Union Berlin 1-1. Union capitalized on Borussia Mönchengladbach losing at home to Stuttgart 2-1 to move to seventh, which would secure qualification for the Conference League, UEFA’s new third-tier European competition.

Union had been targeting survival in its second ever Bundesliga season.

Bayern’s players, substitutes and team staff formed a guard of honor for Lewandowski to run through after he tied Müller’s 49-year-old record with a penalty in the 26th minute in Freiburg.

Lewandowski lifted his jersey to reveal a T-shirt underneath with an image of Müller and the words “4EVER GERD.” Müller set his record when he helped Bayern win the title in 1972.

Freiburg declined to take part in the celebrations. Vincenzo Grifo sent in a corner for Manuel Gulde to equalize three minutes later.

Leroy Sané beat a host of defenders to set up Serge Gnabry after the break, but the goal was ruled out through VAR for offside. Sané shrugged off the decision to score a minute later.

Christian Günter equalized with a fine individual goal for Freiburg in the 81st.

Lewandowski will have a chance to break the record in Bayern’s final game against Augsburg next Saturday.

Frankfurt looked set for Champions League qualification when it was seven points clear of Dortmund after successive wins over Union, Dortmund and Wolfsburg. Then Frankfurt slumped after coach Adi Hütter announced he will join Gladbach next season.

Frankfurt’s loss at already relegated Schalke – by far the worst team in the league – was its third defeat in five games since the win over Wolfsburg. 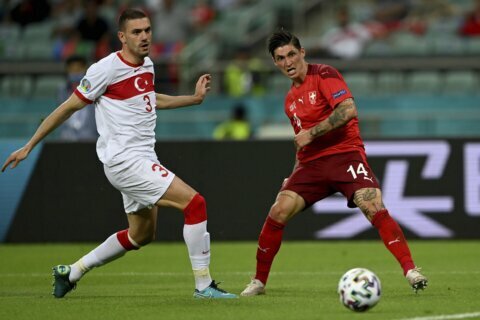