LONDON (AP) — Gary Neville has united a group of former playing rivals turned broadcasting competitors to lobby the British government to introduce an independent regulatory body for English football to help to stave off any renewed attempts to launch a Super League by elite clubs.

A parliamentary petition was launched Monday by Neville along with fellow ex-England players Gary Lineker, Rio Ferdinand, Jamie Carragher and Micah Richards calling for an overhaul of the governance of the game. It was signed by more than 100,000 people in an hour, passing the threshold to be considered for a parliamentary debate.

Six English clubs, including Neville’s former club Manchester United, tried to launch a breakaway European competition last month to usurp the Champions League, with most teams guaranteed entry rather than having to qualify through domestic placings each year. It collapsed inside 48 hours amid an outcry from fans, the government and broadcasters, including Neville on Comcast-owned Sky Sports.

“It was a direct threat to the integrity of the game; destroying the concept of sporting merit and open competition,” read an open letter from the former players on Monday.

“Without swift and direct intervention, the return of a European Super League will be a constant threat,” the letter added, calling for “government legislation to block any Premier League clubs attempting to abandon the country’s football pyramid.”

Lineker presents Premier League coverage on the BBC and the Champions League for BT Sport, which Ferdinand also works as a pundit for. Carragher and Richards appear alongside Neville on Sky.

The Premier League is resisting any regulatory body being appointed, like Britain’s communications watchdog Ofcom.

“I would defend the Premier League’s role as regulator of its clubs over the last 30 years,” league chief executive Richard Masters said last week. “Clearly we’ve had some problems over the last 18 months but so has every industry sector. I don’t think an independent regulator is required.”

Former British Sports Minister Tracey Crouch is currently overseeing a fan-led review of football governance in the wake of the Super League’s collapse and an attempt by the Premier League’s so-called “Big Six” clubs last year to grab more power domestically in a plan known as Project Big Picture.

“A regulator is being proposed by some, being completely hated by others and it’s going to be part of the mix,” Sports Minister Nigel Huddleston told reporters at Wembley Stadium on Saturday. “We’ll see what Tracey comes up in the recommendations,” 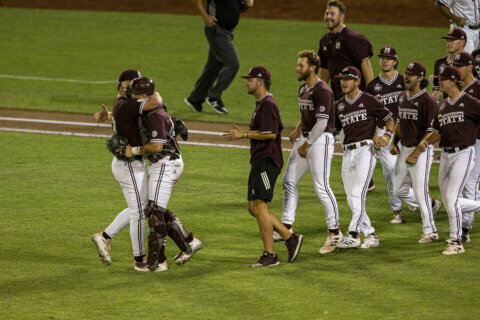