CORONAVIRUS NEWS: Health trends during the pandemic | Montgomery Co. animal services to resume full operations | How many vaccinated in DMV?
Home » Sports » Debate over surgery has…

Debate over surgery has Eichel questioning future in Buffalo

BUFFALO, N.Y. (AP) — The frustration over yet another losing season, combined with what Sabres captain Jack Eichel called “a disconnect” with his team over how to treat a herniated disk led to him questioning his future in Buffalo on Monday.

“I think the most important thing is just trying to get healthy and figure out a way to be available to play hockey next year, wherever that might be,” Eichel said, speaking publicly for the first time since he was hurt in early March.

The face of the franchise had difficulty hiding his disappointment toward the Sabres in speaking to reporters during a 25-minute video call that follows the completion of another miserable season for Buffalo. His comments add a new layer of uncertainty to a team that finished last in the overall standings for the fourth time in seven years, extended its playoff drought to an NHL-record matching 10th season and is in the midst of yet another coaching search.

“I think I’ve got a lot of thinking to do this offseason. There’s a lot that I’ll have to consider,” said Eichel, who declined on numerous occasions to say whether he has requested a trade.

“For now, obviously, I’m here, I’m the captain of this hockey team,” he added. “My goal is to be available and to try to help the guys in the room and help this organization win hockey games. And I’ll continue to do that as long as I’m here.”

Asked whether he still considered himself part of the solution in Buffalo, Eichel responded by calling it “a loaded question” before revealing an ongoing debate he and the team have been having over whether to have surgery.

“I would be lying to say that things have moved smoothly since my injury,” he said. “There’s been a disconnect, I think, from the organization and myself. It’s been tough at times.”

Eichel favors having surgery while noting he’s contractually required to follow the team’s recommendations regarding treatment.

“They definitely hold a lot of cards on what I can and can’t do,” Eichel said. “There’s been some tough conversations, but I’ve got to do what’s best for me.”

The Sabres declined comment by noting general manager Kevyn Adams and interim coach Don Granato are scheduled to speak with reporters on Wednesday.

Eichel was hurt while being checked into the end boards by the Islanders’ Casey Casey Cizikas in the third period of a 5-2 loss on March 7. Eichel, who traveled out of state to seek a second opinion, was initially projected to return before the season ended. That changed last month, when Adams announced Eichel’s season was over.

Adams didn’t rule out the possibility of Eichel having surgery, but not until after the injury was re-examined after the season. Eichel said doctors have informed him the timeline to recover from disk surgery is short, and more beneficial in the long term given the nature of the injury.

The 24-year-old Eichel is the Sabres’ highest paid-player and completed the third year of an eight-year, $80 million contract. He was limited to two goals and 16 assists for 18 points in 21 games in a season he was hampered by numerous injuries, including a broken rib at training camp.

“The losing’s tough. It takes a toll,” Eichel said Monday.

Eichel has been the focus of trade speculation since Adams took over after Jason Botterill was abruptly fired last June. After emphasizing he had no intention of trading Eichel in October, Adams declined to rule out the possibility in March after firing coach Ralph Krueger.

“I guess we’ll just wait and see what happens,” Eichel said. “I’m sure the team’s exploring every possible option.”

Eichel is solely focused on his health.

“I’m only going to play hockey for so long,” Eichel said. “Hopefully, I have many more good years in this amazing game left, but I’ve got to take care of myself.” 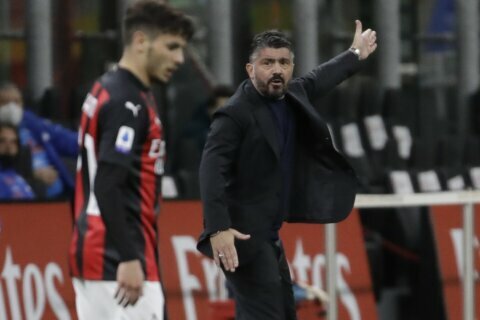