COLUMBUS, Ohio (AP) — Andre Blake had six saves to help the Philadelphia Union to a 0-0 draw with the defending champion Columbus Crew on Sunday night in the season opener for both teams.

Blake made a sprawling save in the 59th minute and diving stop in the 82nd for last season’s Supporters Shield winner.

Columbus had won three straight matches against the Union, including twice last season, both at home. Philadelphia has won only two of its 16 visits to Columbus (2-2-11), and is winless in its last seven there.

Eloy Room had five saves for the Crew, who haven’t allowed a goal in their last four games dating back to the 2020 postseason.

Darlington Nagbe (hamstring) and Aidan Morris (ACL) missed the game for Columbus. Morris, a 19-year-old considered one of the best young Americans in MLS, suffered a left knee injury in the fourth minute of a 1-0 win over Real Esteli FC on Thursday night in a CONCACAF Champions League game. 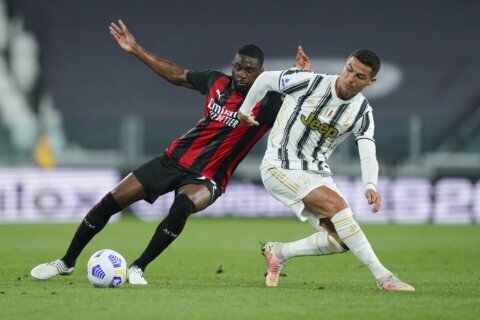