Schalke has tightened security and will file a criminal complaint against its own fans following a violent attack on players…
Listen now to WTOP News WTOP.com | Alexa | Google Home | WTOP App | 103.5 FM

Schalke has tightened security and will file a criminal complaint against its own fans following a violent attack on players and staff after the team was relegated, the club said on Friday.

When the team bus arrived at the stadium early Wednesday after an away loss which ensured relegation from the Bundesliga, it was met by a crowd of up to 600 fans. Some confronted the players and staff as they left the team bus.

Projectiles were thrown and team coordinator Gerald Asamoah told German broadcasters he saw a colleague lying on the ground being kicked. German media reports said some players were chased by the crowd, and fans allegedly damaged players’ cars.

Schalke said the players and staff met on Friday and agreed to resume training next week with heightened security.

“FC Schalke 04 has already taken measures to ensure the safety of players and staff,” the club said. “Furthermore, the club will file a criminal complaint with the police and will not only push ahead with an internal investigation of these incidents with maximum effort, but will also support the authorities to the best of its ability in their investigation.”

Schalke next plays Hoffenheim on May 8. Schalke was due to play Hertha Berlin on Saturday but that game was postponed after a coronavirus outbreak caused Berlin authorities to order the whole Hertha team into quarantine. 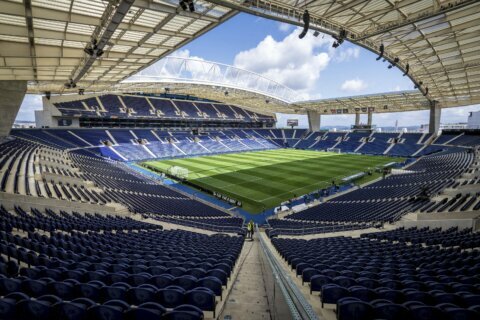