Mehaffey soaking in Augusta National with focus on winning

AUGUSTA, Ga. (AP) — Even in the morning chill, Olivia Mehaffey of Northern Ireland soaked up the experience of playing at the home of the Masters. It was just as amazing as her first experience two years ago in the Augusta National Women’s Amateur.

There was one notable difference Friday. Only one shot out of the lead, she was practicing with purpose.

“Today I was like, I’ve seen Augusta before and it’s incredible,’ and I had that on every single hole,” said Mehaffey, in her final year at Arizona State. “Today I was more focused on my golf, preparing what to expect, where to be, some of the putts. Having that experience allows you to focus a little bit more on the golf course and where you want to be tomorrow.”

The final round is Saturday morning. In only its second year, the Augusta National Women’s Amateur already has become a showcase event for amateurs because of where they’re playing. NBC Sports is televising the final three hours, and if last time was any indication, it could be quite a show.

Jennifer Kupcho, a former NCAA champion, put on a charge that rivals some of the best moment in Masters history. She finished with an eagle and three birdies over the final six holes to beat out close friend Maria Fassi.

U.S. Amateur champion Rose Zhang, the No. 1 female amateur in the world, and Ingrid Lindblad of Sweden were tied for the lead. They were at 1-under 215 after two rounds at Champions Retreat.

Mehaffey and Auston Kim were another shot back.

The winner gets a silver trophy, but no green jacket. Some of the 30 women who made the cut feel the ANWA — in its second year, it’s already known by its acronym — rivals any amateur tournament in the world.

“I think it would be everything, and I think that’s the same for every girl competing this week,” Mehaffey said. “After seeing what Jennifer and Maria did last year, you want to be in their shoes and you want to experience what they experienced.”

Mehaffey is among nine players who also made the cut in 2019. She started six shots behind Kupcho last time and never was in serious contention. Given how firm the course was during practice on Friday, the final round could deliver any number of possibilities.

“I don’t think you’re going to see anyone run away with it unless they go low, which I think is kind of exciting,” Mehaffey said. “But whoever wins tomorrow is going to have to play great golf because it’s a tough test right now.”

Only eight shots separate the co-leaders from the bottom of the pack, Maja Stark of Sweden, who earned the final spot in a 5-for-1 playoff on Thursday by making an 18-foot birdie putt on the first extra hole.

Stark also competed in the final round in 2019. She noticed Friday that the course didn’t seem to be as difficult. “But I think that was on the holes I messed up,” she said with a laugh. What she didn’t immediately notice was there were no grandstands. The Masters next week is allowing only limited spectators, without giving a number.

“I was comparing it to the practice round we had two years ago where I just felt like, ‘Oh, it’s so wide. I can hit it anywhere.’ And then 20,000 people came and I was like, ‘Oh, I’m going to kill someone if I hit it anywhere,'” she said.

Limited spectators were be allowed on Saturday, too.

Erica Shepherd found even more pressure in the opening two rounds because she made the cut in 2019 and was desperate to get back. She still was seven shots behind — just like last time — and wasn’t sure what kind of score it would take.

But she has high expectations for the experience.

The inaugural event was such a big deal that Shepherd rated the prestige ahead of the U.S. Women’s Amateur, which has a century of history behind it. A big part of that is where it’s played.

“I’ll always be able to say I was there for the first one,” she said. “Twenty years from now we can look back and say that was a turning point in women’s golf. The support and the fans that were all about this event two years ago was something I never expected. I’ve played in LPGA events and U.S Opens and sometimes I’ve been disappointed how little fans were out there. To see the support, that made me happy.”

Laporta leads after opening round in the Canary Islands 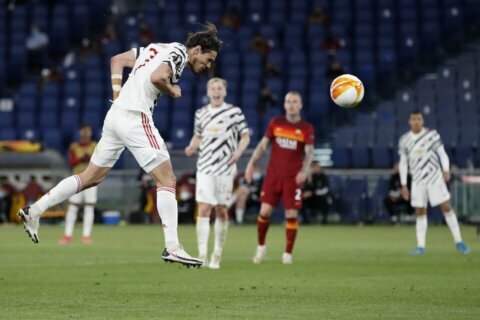