Manchester City could clinch a third Premier League title in four seasons this weekend if Pep Guardiola’s side beats Crystal Palace on Saturday and then second-placed Manchester United loses to fallen champion Liverpool the next day. Like City, which hosts Paris Saint-Germain on Tuesday leading 2-1, Chelsea is preparing for a Champions League semifinal. With the first leg against Real Madrid drawn 1-1, Chelsea manager Thomas Tuchel could make changes for Saturday’s game against Fulham. But there is fourth place and certain Champions League qualification to lock down, with only a three-point advantage on West Ham. Fulham is seven points from safety with five games remaining. Fulham is trying to catch Brighton, which is a place above the drop zone as it travels to ninth-placed Leeds. Everton, which is eighth going into the game against Aston Villa, is chasing Europa League qualification

In table-topping matches, defending champion Paris Saint-Germain faces Lens at home and leader Lille hosts mid-table Nice. Lille lead by only one point over PSG with three rounds to go after this weekend. PSG will be without 25-goal league top scorer Kylian Mbappe. He hurt his right calf in a 2-1 midweek home loss to Manchester City in the first leg of their Champions League semifinal. PSG coach Mauricio Pochettino may choose to rest some key players ahead of the return leg next week. Lens is vying with Marseille and Rennes in a tight race for fifth place, a Europa League spot. The northern side beat PSG 1-0 at home this season.

Inter Milan has a second shot at winning Serie A this weekend. It needs to beat last-placed Crotone and hope Atalanta fails to beat Sassuolo on Sunday to clinch a first league title since 2010. AC Milan needs a win at home to relegation-threatened Benevento to boost its chances of qualifying for the Champions League. Benevento is in the bottom three but level on points with the two teams immediately above it. Also, Spezia is at Hellas Verona.

Atlético Madrid visits Elche seeking a win to strengthen its lead of the Spanish league with Real Madrid, Barcelona and Sevilla all within three points. Atlético has squandered a once double-digit lead, but Barcelona’s shock loss to Granada this week gives it another chance to take command of the title race with five rounds to go. Diego Simeone’s side is two points clear of Barcelona and Real Madrid, which faces Osasuna also on Saturday. Madrid’s home match comes before it visits Chelsea in the second leg of their Champions League semifinal. Last-place Eibar hosts Alavés in desperate need of a victory to try to avoid the drop. Relegation-threatened Huesca also plays Real Sociedad.

Borussia Dortmund faces second-division side Holstein Kiel for a place in the German Cup final against Leipzig or Werder Bremen in Berlin on May 13. Usually, the final is the season’s crowning showpiece, but the pandemic means it will be played in an empty stadium once again – on a Thursday, before the league has even finished. For Dortmund it’s the only remaining chance of a title. Edin Terzić’s team is fighting for Champions League qualification but the cup can provide a welcome distraction. Dortmund last won the cup in 2017. Kiel won’t be a pushover, however. Ole Werner’s team knocked out defending champion Bayern Munich and is a candidate for Bundesliga promotion. Kiel is fourth in the second division, just four points behind the top three having played three games less. The top two are promoted automatically while the third-place finisher has a playoff. 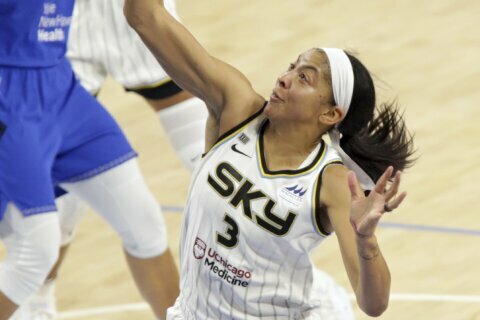 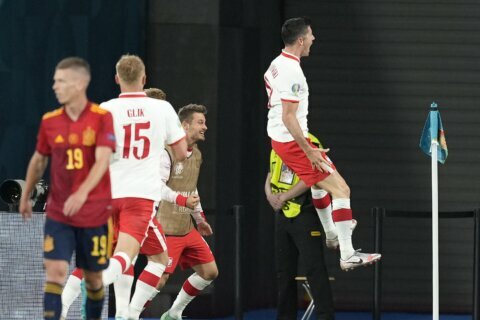