Atlético Madrid faces a critical test in its title bid when the league leaders visit fourth-place Sevilla. Real Madrid has closed the gap to three points, and Barcelona is four points adrift before playing Monday. Atlético has squandered a once double-digit advantage over the past two months with just four wins in nine rounds. João Félix is doubtful with a leg injury and forward Yannick Carrasco is serving a one-game suspension, leaving coach Diego Simeone with Luis Suárez and Ángel Correa in attack. The match pits the two stingiest defenses in the league against one another. Atlético has allowed a league-low 18 goals; Sevilla is next with 21. Manuel Pellegrini’s Real Betis visits Elche seeking to keep up its strong form after winning five of its last six games. Alavés plays Celta Vigo needing a win to move off the bottom of the table, while Valencia is at a Cádiz side that is also trying to stay out of the relegation fight.

Manchester United heads into the match against Brighton with uncertainty over who will play in goal. While this season has seen Dean Henderson mainly used in cups, he has featured in the last six matches in all competitions after David De Gea returned to Spain for the birth of his first child. While United is in second place, Brighton is focused on Premier League survival, sitting six points clear of the relegation zone. Newcastle, with only two wins in its last 18 league games, is only two points above the bottom three as it prepares to host Tottenham. Jose Mourinho’s side can go level on points with fourth-place Chelsea after the west London club’s surprising loss to West Bromwich. Fulham goes into a game against Aston Villa two points behind 17th-place Newcastle, having lost its last two fixtures. Southampton and Burnley, who are both seven points ahead of Fulham, meet on the south coast.

Neither Union Berlin nor Hertha Berlin imagined they could be in their respective Bundesliga positions with seven games remaining as they outlined their goals for the season. Ahead of the league’s fourth-ever derby between the rivals, Hertha is languishing in danger of relegation and Union is challenging for European qualification. A change of coach hasn’t prevented Hertha sliding to 15th in the 18-team league, just one point above Cologne in the relegation zone. Union was only targeting survival from its second-ever season in Germany’s top-flight, yet Urs Fischer’s team is flying high in seventh – 14 points above Hertha. Union, which hosts Sunday’s derby in its Stadion An der Alten Försterei, will take heart from knowing the home team has won each of the three top-flight derbies between the side so far. Also Sunday, promoted Stuttgart hosts Werder Bremen.

Sixth-place Marseille continues its push for fifth and a Europa League slot when it hosts last-place Dijon at Stade Velodrome. Marseille coach Jorge Sampaoli will look for his third win in four games since taking charge, especially given that Dijon has lost 10 straight league games and seems condemned to relegation. Rennes and Marseille are also in contention for the Europa League since they are one point behind Marseille. Both have tricky away games at midtable sides, with Rennes going to Reims and Montpellier traveling to Angers. 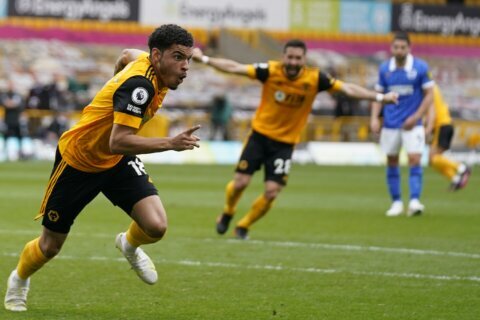 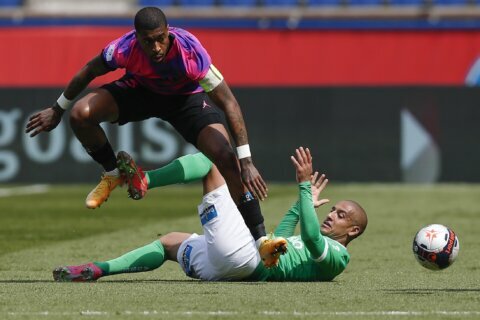