She’s the new face of British and Irish horse racing, to some the savior of a sport that has endured…
Listen now to WTOP News WTOP.com | Alexa | Google Home | WTOP App | 103.5 FM

She’s the new face of British and Irish horse racing, to some the savior of a sport that has endured the worst kind of publicity in recent weeks.

Now Rachael Blackmore has the chance to make herself known to an audience well beyond the typical borders of racing by breaking down what has long been seen as one of the biggest gender barriers in all of sports.

Three weeks after becoming the first woman to finish as the leading jockey at the prestigious Cheltenham Festival, Blackmore — a 31-year-old Irishwoman — will look to be the first female winner of the Grand National Steeplechase, one of the world’s most grueling horse race that features 40 horses running a 4½-mile (6,400-meter) course containing 30 fences.

Blackmore is down to ride Minella Times, a horse that is currently joint-second favorite at 10-1, at Aintree on Saturday in a race that even non-horse racing enthusiasts turn on to watch and has been a mud-splattered British sporting institution since 1839.

One that Blackmore, as a kid, used to watch in awe. Indeed, her first memory of horse racing is going over to a friend’s house and taking part in a sweepstake for the National.

Now, the Blackmore-ridden Minella Times is the name punters would love to pick out.

“It is so far from anything I thought could be possible,” she said this week, “but you allow yourself to picture it — I think everyone has.”

Blackmore was aboard six winners at Cheltenham last month, more than any other jockey and just one short of the record haul for a single week at the festival.

British and Irish horse racing had just been dragged through the mud because of the controversies involving leading trainer Gordon Elliott and amateur jockey Robert James, who were both pictured sitting on dead horses in images that were circulated widely on social media. Blackmore’s Cheltenham success brought some light to a dark period for the sport.

A professional jockey since 2015 after growing up on a farm and riding ponies, she rode the second most winners in Irish jump racing in 2018-19, the same season she won her first races at Cheltenham.

She is now the leading jockey at trainer Henry de Bromhead’s stable, and is resilient as well as brilliant — along with her six winners, she had four falls at Cheltenham.

It stands her in good stead for the National, with its steep and sometimes brutal fences. Female jockeys have only been allowed to enter and race in the National since 1975, when the Sex Discrimination Act was passed, and there has been a regular flow of women on horses in recent years.

Katie Walsh has the best finish for a female rider, when third on Seabass in 2012. Blackmore fell at the famous fence called The Chair on her National debut in 2018 and finished way back in 10th aboard Valseur Lido in 2019.

The race was canceled last year because of the pandemic and there have been no race-goers at the Aintree Festival this week because of coronavirus restrictions. A crowd of 70,000 usually attends the National.

Cloth Cap is the pre-race favorite, at odds of 9-2 with some bookmakers, and among the owners of the 40 competing horses is former Manchester United manager Alex Ferguson, who has entered 80-1 shot Give Me A Copper. Ferguson had three winners on Thursday, the opening day of the festival.

Tiger Roll, the winner in 2018 and ’19, will not be going for an unprecedented third straight victory after he was withdrawn from the field by his owners because they were unhappy with the weight he had been allocated. 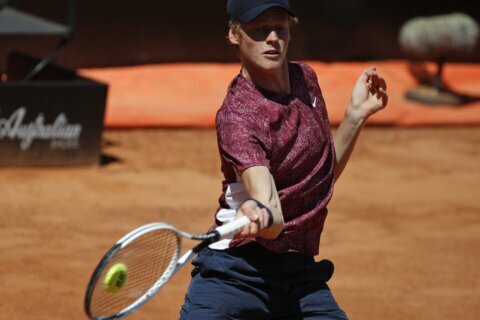