BARCELONA, Spain (AP) — Atlético Madrid has 10 games left this season to protect what remains of its once commanding lead in the Spanish league.

The team led Barcelona by 12 points in December, but that advantage has shrunk considerably since the start of the year. After winning only four of its last nine league games, Atlético now leads Barcelona by just four points.

Atlético faces one of its toughest remaining matches on Sunday when it travels south to play at fourth-place Sevilla. With both teams eliminated from the Champions League and the Copa del Rey, their focus is fully on the league standings.

“It would be very painful to lose this league,” Atlético midfielder Koke Resurrección told Marca Radio while playing for Spain in World Cup qualifying over the past week.

“We all know that leagues are decided over the final stretch of the season,” he said. “We knew that things would get tight … We shouldn’t worry about being favorites or not. Barça and Real Madrid, which are among the best teams in the world, will fight until the end just like we will.”

Atlético will be waiting to see if forward João Félix is fit to play after he had to be substituted with an apparent injury in Portugal’s World Cup qualifier against Luxembourg on Tuesday.

If he cannot play, that will put even more pressure on Koke to link up with Luis Suárez, whose 19 goals this season are second only to Lionel Messi’s 23 in the competition.

After winning seven of its last eight home matches in the league, Sevilla has a strong hold on Spain’s final Champions League berth for next season with a 10-point lead over fifth-place Real Sociedad. But the team could still catch third-place Real Madrid, if it becomes complacent by focusing on its current Champions League bid.

Sevilla will have holding midfielder Fernando Reges back after he missed two matches with a muscle injury. Fernando said the international break will help his team regroup for the remainder of the campaign.

“Our team had gotten a bit worn down and was not playing at its best in some of our most recent matches, but after this break will be better prepared (for Atlético),” Fernando told Spanish website Muchodeporte.

Atlético’s top rivals face teams trying to avoid relegation. Barcelona will try to add to its 18-match unbeaten streak when it hosts Valladolid on Monday. Madrid, which trails Atlético by six points, welcomes Eibar on Saturday.

The two Basque teams will meet in Seville at La Cartuja Stadium.

Organizers delayed the match from last year hoping the public health situation amid the coronavirus pandemic would improve enough to let spectators into the match. But with Spain still battling COVID-19, the country’s soccer federation said it would be impossible to allow fans in.

The match will be the first of two cup finals for Bilbao this month. The team has also reached the final of this season’s Copa del Rey and will face Barcelona on April 17. 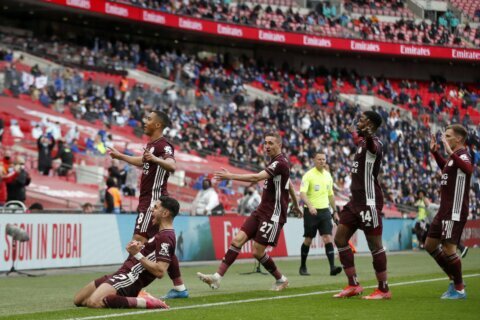