LUXEMBOURG (AP) — Cristiano Ronaldo scored as Portugal came from behind to defeat Luxembourg 3-1 in World Cup qualifying on Tuesday.

Luxembourg, which opened with a surprise win over Ireland, looked on its way to another shock result after Gerson Rodrigues put the hosts ahead in the 30th minute. But Diogo Jota equalized in the second minute of stoppage time and Ronaldo and João Palhinha added second-half goals.

After being held scoreless in the first two qualifiers this year, Ronaldo scored his 31st goal in World Cup qualifying in the 51st with a touch from close range after a low cross by João Cancelo.

He has now scored for Portugal in every calendar year since his first international goal in 2004, and moved six away from tying the all-time scoring record for a men’s national team. The record of 109 goals is held by former Iran striker Ali Daei, the only other male soccer player to surpass the 100-goal milestone.

Ronaldo had been furious after having a goal disallowed in the 2-2 draw against Serbia on Saturday even though it appeared that the ball crossed the line.

Jota equalized with a header for his third goal in these qualifiers, and Palhinha came off the bench to score his first goal in three international appearances in the 80th.

Luxembourg defender Maxime Chanot was sent off in the 86th after being shown a second yellow card for a hard foul.

Portugal forward João Félix had to leave the field in the first half because of an injury.

Earlier, Aleksandar Mitrovic scored a goal in each half as Serbia defeated Azerbaijan 2-1 to stay tied with Portugal at the top of Group A with seven points from three matches.

Luxembourg stayed in third place with three points. Only the group winners qualify directly for the 2022 World Cup in Qatar. The runners-up will have to go through a playoff.

Mitrovic opened the scoring in the 16th and netted the winner in the 81st to give Serbia seven points from three matches in Group A. It is three points ahead of Portugal, which visits Luxembourg later Tuesday.

Mitrovic has scored five goals in the first three qualifiers. The Fulham forward had a double in the opening 3-2 win against Ireland, and he also found the net in the 2-2 draw against Portugal.

The hosts, who lost eight of their last nine World Cup qualifiers, stayed with zero points from two games. 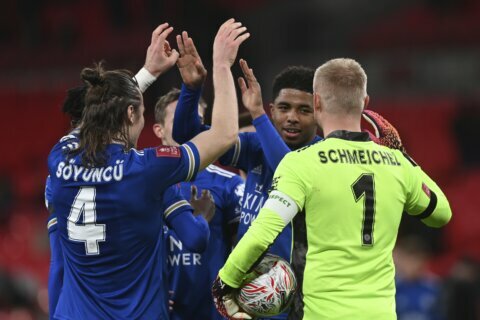