Sunday’s decider pits two-time Grand Slam runner-up Medvedev against a player who owns all four majors in doubles but has never won a singles title, and is ranked 93rd.

Medvedev, who climbs to No. 2 in the rankings next week, led 6-4, 3-0 against qualifier Matthew Ebden when the Australian retired through an unspecified injury on Saturday.

“Really unfortunate to end the match like this. I knew that even with an injury I had to just continue playing, trying to win,” Medvedev said. “You cannot give easy points just because he’s injured. So I really sorry for him, hopefully he can recover fast and it’s nothing serious.”

Boosted by his win over second-seeded Stefanos Tsitsipas on Friday, Herbert brushed aside fourth-seeded Ugo Humbert 6-3, 6-2. He had nine aces and did not face a single break point in their all-French match.

The surprise final is a result of Herbert’s largely unexpected run. He beat former No.4-ranked Kei Nishikori earlier this week at the indoor tournament.

Medvedev, however, is heavy favorite considering that the Australian Open runner-up’s victory on Saturday means he has won 22 of his last 24 matches.

But Herbert’s serve-and-volley style could cause him some problems.

The 287th-ranked Ebden — the lowest ranked semifinalist in the tournament’s 28-year-history — disturbed Medvedev’s rhythm at times and Medvedev had to save three break points in the first set.

“He’s a tough opponent to play, he does serve and volley, he plays (with) no rhythm, so that’s why it’s tough to say if I played well or not,” Medvedev said. “But looking forward for tomorrow. Luckily this time no crowd, because a final against a French guy in Marseille with a crowd would be not an easy challenge.”

When he climbs to No. 2 on Monday, Medvedev will be the first player outside the Big Four of Roger Federer, Rafael Nadal, Novak Djokovic and Andy Murray to do so since Nadal in July 2005. 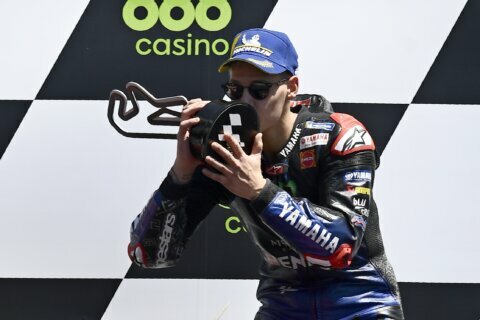