Kyle Busch cruises to another NASCAR Trucks win in Atlanta

Busch pulled way over the last 30 laps and finished more than 4 seconds ahead of the field.

“It’s always cool to get back to victory lane,” he said.

Busch has been there plenty of times in Atlanta, where he claimed his sixth Trucks victory to go along with four other top-10 finishes. He did a burn-out at the finish line in front of the socially distanced crowd before taking his customary bow.

Nemechek, as the points leader, started from the pole coming off a March 5 win at Las Vegas, where he held off his car owner to take the checkered flag.

Busch got him back in Atlanta.

“I was hoping to beat Kyle, but I didn’t have anything for him at the end,” Nemechek said.

Austin Hill was second in his best showing of the season.

“That last restart we had, I was trying to save my tires a little bit,” Hill said. “The pit crew did an awesome job today, but I gave that gap up and I could never close it. I needed to be a little quicker.”

Hill, from Winston, Georgia, won’t get another chance to win at Atlanta this season. The track’s second NASCAR weekend in July includes only the Cup and Xfinity series.

“I love Atlanta Motor Speedway,” he said. “I just wish we could have gotten the job done and wish we could come back. This is a fun place to run.”

Johnny Sauter was fourth followed by Sheldon Creed in a Chevrolet — the only non-Toyota truck in the top five. 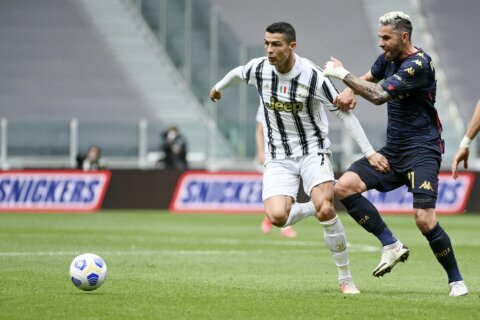 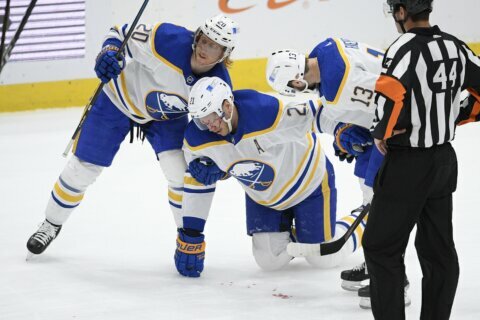 Sabres Okposo to miss rest of season with broken cheekbone