BARCELONA, Spain (AP) — Whoever becomes Barcelona president will have a hard time getting rid of Ronald Koeman as coach.

The progress the team has made since losing to Bayern Munich 8-2 in August was evident on Wednesday, when Barcelona rallied past Sevilla to reach the Copa del Rey final with a 3-0 extra-time win.

In the build-up to the second leg of the semifinals in Seville, Koeman called on the rest of team to step up and give Lionel Messi a hand in scoring goals. And although Messi was still the engine that drives Barcelona’s attack with his passing, dribbling and vision, it fell to three of his teammates to put the ball past Sevilla’s imposing defense.

“This is my happiest night as Barcelona’s coach,” Koeman said after his team overturned Sevilla’s 2-0 victory from the first leg at Camp Nou last month.

“We always believed. We have never given up on this Copa,” the former Barcelona defender said. “It is a question of mentality. As coach, I cannot ask my team to give any more than what it did tonight.”

Barcelona faces an even bigger hurdle next week when it visits Paris Saint-Germain in the Champions League trailing 4-1 from the first leg. But the team can aspire to keep up its positive momentum in the Spanish league.

Barcelona visits Osasuna on Saturday and a win would put it two points behind leader Atlético Madrid, which faces a derby against third-place Real Madrid on Sunday.

In the match against Sevilla, Ousmane Dembele further shed the image of the player who in previous seasons was injury prone and erratic by starting Barcelona’s comeback with a goal from beyond the area.

Marc-Andre Ter Stegen later smothered a penalty shot from Lucas Ocampos, and Gerard Pique then sent the match into extra time by heading in a goal in stoppage time. Instead of Messi providing the winner, Barcelona’s workmanlike Martin Braithwaite enjoyed the glory by heading in the third goal.

It was a choral performance that confirmed the strides Koeman has made with the young players he has shepherded along since his arrival. Pedri González and Frenkie de Jong dictated the midfield, Sergiño Dest attacked on the flank, and Óscar Mingueza held firm in the three-man backline.

Barcelona’s presidential election will come a day after the match against Osasuna. Club members will choose between three candidates — former president Joan Laporta, former board member Toni Freixa and businessman Víctor Font. None have publicly committed to keeping Koeman as coach, and the possibility of former player Xavi Hernández returning to the club, possibly as coach, was one of the central topics in a debate between the candidates this week.

Koeman signed a two-season contract with Barcelona last year. The club fired two coaches last season, its first to finish without a title since 2007-08.

The election comes with Barcelona in its worst moment in well over a decade. Already facing debt of more than 1.1 billion euros ($1.3 billion), the club’s reputation took another blow this week when Josep Bartomeu, the club president until he resigned in October, was arrested on suspicion of irregularities during his administration.

But underneath all the chaos and noise, Koeman has been doing his work on the field.

“The team is growing with the changes we have made, giving chances to young players,” Koeman said. “The team plays well on the attack, but above all we have improved in defense. We are strong, we run more, and pressure harder. I think that there are good things to come.” 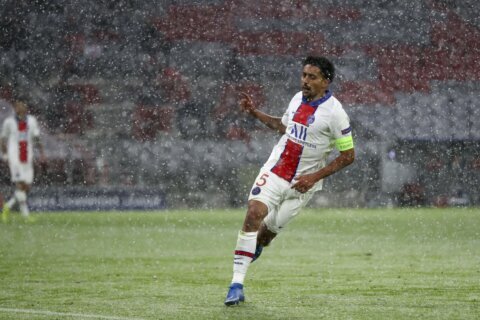