Gladbach coach hopes for the ‘extraordinary’ against City

If Borussia Mönchengladbach coach Marco Rose had his way, he’d spend this week on the training field attempting to iron out the flaws in his stumbling team ahead of the final weeks of the Bundesliga season.

Instead, Gladbach — on a six-game losing run — must make another trip to Budapest in the last 16 of the Champions League, faced with the implausible task of overturning a 2-0 deficit against a team Rose regards as the best in Europe.

“I don’t believe in miracles,” Rose said Monday, a day before taking on Premier League leader Manchester City. “It would have to be something extraordinary, or more than that. Something close to a sensation.”

Gladbach has lost every game since the Feb. 15 announcement that Rose will be joining Borussia Dortmund at the end of the season as the replacement for Edin Terzic.

The team isn’t only facing elimination from the Champions League. Gladbach has dropped to 10th place in the Bundesliga and appears increasingly unlikely to return to Europe’s top competition next season.

So, Rose would prefer something of a reset amid this hectic season. Simply a few days to work with his players.

As it is, their confidence could be hit further with another loss to City, especially with Rose pledging to play more “open” in the second leg, which will again be staged in the Hungarian capital because of coronavirus travel restrictions.

“At the moment, whatever I say is always wrong because we aren’t getting the right results,” Rose said through a translator. “If I say we go to Budapest to play Manchester City full of confidence, everyone would say, ‘What the heck? What is wrong with you, Mr. Rose?’

“So we can only say it would feel good if we had the chance to train more and talk more about the small details. It has happened in the (last) 10 matches we’ve played, we’ve been punished for all the small details, all the mistakes we have been doing. We have to be more responsible in these situations until we reach a point where we are able to get a result.”

Defender Ramy Bensebaini and midfielder Christoph Kramer could return from injury for Gladbach, which conceded goals to Bernardo Silva and Gabriel Jesus in a one-sided first leg on Feb. 24.

“The most important thing is to travel there, enjoy the match, listen to the Champions League anthem ahead of the match and enjoy every moment there,” Gladbach defender Nico Elvedi said through a translator. “But we want to take advantage of every chance. Everything is possible in football.”

City has won 23 of its last 24 games in all competitions, losing to local rival Manchester United in the other match.

The Premier League title looks to be secure — City has a 14-point lead with eight games left to play — and Guardiola’s team has reached the final of the English League Cup and the quarterfinals of the FA Cup. Inevitably, there is increasing talk about City winning all four competitions this season, a feat that has never been achieved in English soccer.

“Inside the dressing room, inside the team, I can see hungry eyes,” City defender Oleksandr Zinchenko said of the “quadruple.” “Everyone is so hungry for the titles. This period right now is the most important two months in our careers.

“Especially for players like Sergio Aguero and Fernandinho, who have been here around 10 years. These kind of players deserve it. We are going to try.”

Speaking a few minutes later, Guardiola admonished Zinchenko for looking too far ahead, saying winning the quadruple is a “utopia.”

“I am older than Mr. Zinchenko,” Guardiola said. “I have more experience. I do not agree with him. So all Zinchenko has to worry about is to do a good game tomorrow and that we go through.” 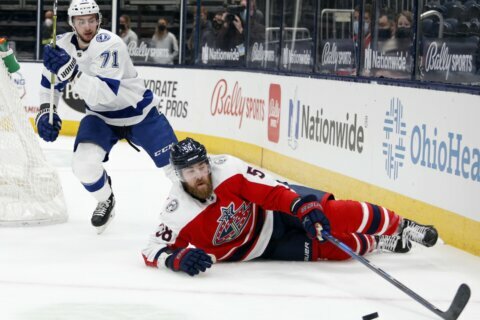