DUISBURG, Germany (AP) — Germany coach Joachim Löw won’t be at the World Cup in 2022, but his team took a step toward qualifying with a 3-0 win over Iceland on Thursday, with the team also making a statement about human rights concerns.

The result was never in doubt after Germany took a 2-0 lead in the opening seven minutes. It was a commanding way to bounce back from a 6-0 loss to Spain in November which heralded the end of the 15-year Löw era.

He will step down as coach after the European Championship this summer after spending the last three years trying to rebuild a team which failed to get out of the group stage as defending champion at the 2018 World Cup.

Before the game, Germany’s players lined up in T-shirts bearing the slogan “HUMAN RIGHTS.” It came a day after a similar protest by Norway in reference to labor rights abuses in host nation Qatar. The Germany team didn’t immediately specify the focus of the statement.

Germany opened the scoring after two minutes with a goal made at Bayern Munich. Joshua Kimmich lobbed into the Iceland penalty area and Serge Gnabry knocked it back for a third Bayern player, Leon Goretzka, to score with a calm finish. Five minutes later, Germany was 2-0 up after Leroy Sane cut the ball back from the left flank for Kai Havertz to hit low past Hannes Thór Halldórsson.

Germany eased off a little after that, but Ilkay Gündogan made it 3-0 in the 56th minute with a low shot from outside the penalty area, and Serge Gnabry hit the post with a chance to make it four.

Germany was without midfielder Jonas Hofmann and full-back Marcel Halstenberg after Hofmann tested positive for the coronavirus. Halstenberg was deemed a close contact after he was pictured playing backgammon with Hofmann on Wednesday. The other players tested negative Thursday, the German soccer federation said.

That meant Emre Can had to play as an emergency left-back, but the Borussia Dortmund defensive midfielder was rarely under serious pressure in his unfamiliar position.

Bayern Munich’s 18-year-old forward Jamal Musiala came off the bench in the 79th for his senior international debut. Musiala represented both England and Germany at youth level before opting for Germany, the country of his birth.

Elsewhere in Group J, Ianis Hagi’s 86th-minute goal gave Romania a 3-2 win over North Macedonia, just after the North Macedonians had completed a comeback from 2-0 down. Liechtenstein came close to earning its first point in a World Cup qualifying campaign since 2013, but Noah Frommelt’s 83rd-minute own goal handed a 1-0 win to Armenia. 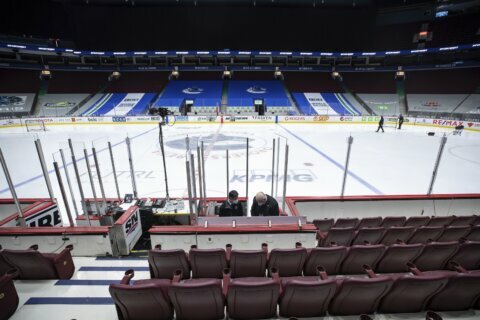